Cops blasted over response to stabbing

Cops blasted over response to stabbing 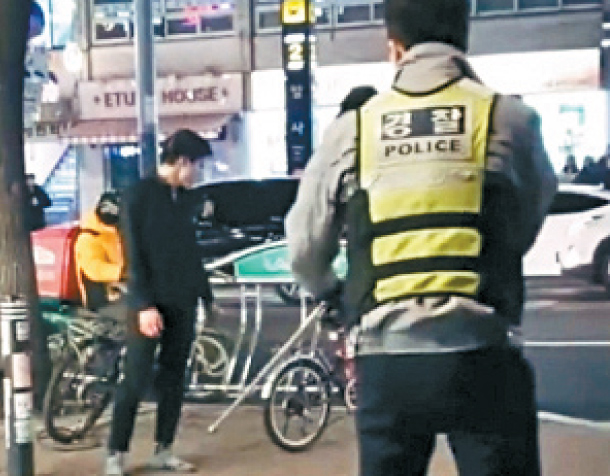 A teenager surnamed Han, left, who allegedly stabbed his robbery accomplice near Amsa Station in eastern Seoul on Sunday evening. [GRAB FROM YOUTUBE]

The police are facing criticism for their relaxed reaction to a stabbing near Amsa Station in eastern Seoul on Sunday evening.

A video clip posted on social media shows a 19-year-old surnamed Han, surrounded by filming bystanders, stabbing an 18-year-old surnamed Park, apparently because he was angry at Park for telling the police that they both robbed a grocery store together. After the police arrived, they unsuccessfully tried to subdue Han using a Taser. Han is also seen nonchalantly smoking a cigarette in front of the police before they arrest him and send Park to the hospital.

According to the Gangdong Police Precinct, Park and Han were friends who robbed a store in Gangdong District, eastern Seoul, on Sunday and made off with money and goods. The police’s reaction to the stabbing and the fact that they missed Han with their Taser enraged online commenters.

“The police aren’t doing their job,” said one person surnamed Kim. “The scene of them failing to take down Han with a Taser seemed pathetic.”

“At first glance, it might seem as if the police are being passive as they are handling Han,” said Min Gab-ryong, the commissioner general of the National Police Agency during a press conference on Monday. “But they were only following the police manual of how to handle a criminal brandishing a knife... it was the appropriate action that could be done in the situation.”

Min also said the police didn’t have the budget to practice using Tasers because their rounds cost even more than bullets for firearms. Park did not have any serious injuries, the police said. The police also said that they will issue an arrest warrant for Han on assault charges.