While a number of KBO veteran players are still looking for a club to play for in the coming season, Bae Young-soo - now of the Doosan Bears - was lucky enough to complete his signing early. 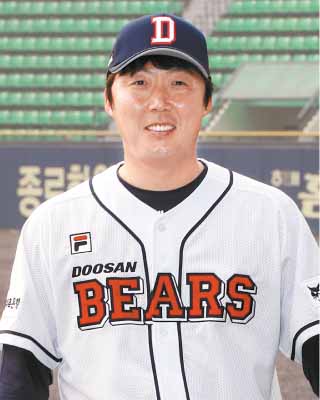 Bae, who made his KBO debut with the Samsung Lions in 2000, has picked up 137 career wins. In the KBO, he is good enough to be ranked fifth in all-time wins and first amongst active pitchers, a good eight wins more than the Bears’ Chang Won-jun.

Despite his illustrious career, Bae had a disappointing 2018 with the Hanwha Eagles, finishing with two wins and three losses with a 6.63 ERA. Bae was relegated to the Futures League in June 2018 and hasn’t been called back up.

Even in the Futures League, Bae only started in two games. Due to this, he was released by the Eagles at the end of the year.

“For the first time, I took four months off,” Bae said. “Since I was taking a break without playing baseball, I gained weight, up to 104 kilograms (229 pounds). It was the heaviest I’ve ever weighed.”

Just when he thought he was running out of options, Bae was contacted by the Bears who were looking for an experienced pitcher. With the signing, Bae got to wear a Seoul team’s uniform for the first time in the nearly 20 years since his debut.

“I prepared for the season better than any other players and except for two to three games, I think I fulfilled my role,” Bae said. “I’m disappointed that we’re losing our chances just because we’re old and expensive. I wanted to play.”

“When I got a call from Doosan, I was very happy,” Bae said. “Veteran players are in a tough position these days so I was thankful that Doosan recognized me. It just feels like we, the veteran players, are standing at the edge of the hill.”

Due to an unexpectedly long break, Bae began his offseason training earlier than others. While he normally doesn’t touch a baseball during the winter, he has already started his pitching training. Bae had individual training sessions with the Eagles’ Kim Beom-su and Kim Min-woo in Okinawa, Japan, and returned to Korea Monday.

“I ran, pitched and did a lot of weight training,” Bae said. “I’m satisfied with my offseason training.”

This season, Bae is expected to have a more meaningful year as he’ll wear his old number, 25, again. Bae wore 25 while he played for the Lions, but took 37 or 33 when he moved to the Eagles. Luckily, Bae was able to reclaim his old number this year after Yang Eui-ji announced his signing with the NC Dinos.

“Doosan and the fans may be disappointed that Eui-ji left the team, but to me, this number has a very special meaning,” Bae said. “It felt weird watching myself wearing a uniform with the number 25 again.”

The Bears’ addition of Bae came as a big surprise as manager Kim Tae-hyung said they have enough players for starters. Without Bae or Lee Hyung-bum, who was included in the roster as a compensation player for Yang, the Bears already have two foreign pitchers, Lee Yong-chan, Lee Young-ha and left-handed pitchers Yoo Hee-kwan and Chang.

As Bae is well aware of the situation, he is ready to play any role even if it’s not a starter.

“Since the time I left Samsung, there was a rumor that I insist on only being a starting pitcher,” Bae said. “But that’s not true. I always started offseason training with the other players and competed against them all the time for a starting spot.”

This season, rather than just staying healthy, Bae is hoping to play the role that suits his experience and age.

“Doosan is a team looking for a win and is well organized,” Bae said. “All its players work together to win and I want to be a part of it.”