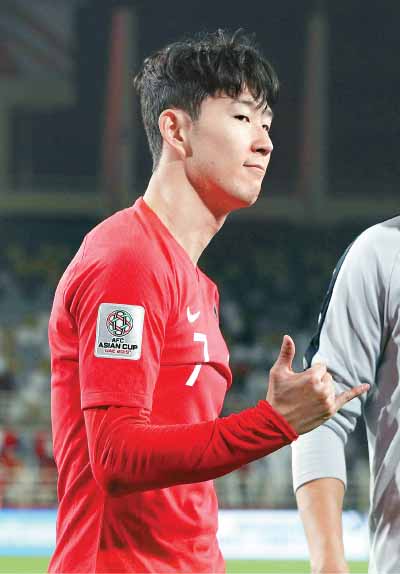 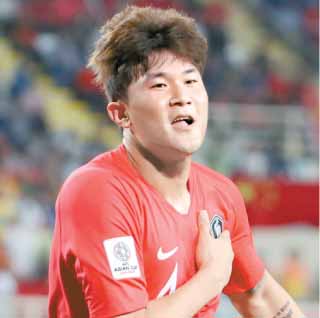 Although he didn’t score either of the goals, the return of captain Son Heung-min of Tottenham Hotspur once again proved crucial for the team’s victory at Al Nahyan Stadium in Abu Dhabi, the United Arab Emirates (UAE).

Korea seemed to dominate from the start, with Son’s return quickly paying off. Just 14 minutes into the game, Son was fouled in the box after China’s center-back Shi Ke failed to keep up with his fancy footwork. Hwang Ui-jo of Gamba Osaka was given the nod and calmly put the ball in the bottom-left corner of the net, comfortably beyond the reach of goalkeeper Yan Junling.

The Taeguk Warriors held on for the rest of the half, reaching the break with a slim 1-0 lead.

Not long into the second half, Kim Min-jae of Jeonbuk Hyundai Motors added another goal to give Korea some breathing room.

In the 51st minute, Kim headed a well-placed corner from Son Heung-min into the top-left corner of the goal, extending the score to 2-0.

Both Hwang and Kim scored their second goals at the 2019 Asian Cup.

Korea dominated throughout the game despite missing two key players. Both Ki Sung-yueng and Lee Jae-sung were unable to appear in Wednesday’s game due to injuries.

Korea’s superiority throughout the game was reflected in the statistics. Korea had 17 shots and eight on target compared to China’s six shots with only one on target. Korea also kept ahold of the ball throughout the game, with 62 percent of total possession.

The Taeguk Warriors also played a much cleaner game than China, with just six fouls in 93 minutes compared China’s 14.

While no Korean players were booked, China picked up four yellow cards. That difference could prove crucial in the coming games due to new accumulated card rules at this year’s Asian Cup. As the AFC Asian Cup has an expanded field of 24 teams this year, a round of 16 has been added to the format. Due to this, yellow cards will be accumulated until the round of 16 matches. If a player has two yellow cards, they will not be able to play in the quarterfinals.

With the win, Korea finished its Group C action with three wins, totaling nine points. Korea, looking for their first Asian Cup trophy since 1960, also defeated the Philippines and Kyrgyzstan, both by one goal to nil.

Despite the challenging games China will now face, head coach Marcello Lippi was philosophical in defeat.

“Let’s be honest, the Korean team is much stronger than us - they’re faster, technically superior and play with greater intensity,” said Lippi. “They are one of the favorites to win the tournament - we have to accept that and focus on our next challenge.”

The Chinese team will now face Thailand in the round of 16. Although China is not known for its footballing prowess, the popularity of the sport has grown significantly since Lippi took the helm. China beat both the Philippines and Kyrgyzstan in the group stages and goes into the match against Thailand as the favorite.

The new format also means that Korea faces a significantly easier path to the final.

This year, as well as the top two teams from each group advancing to the round of 16, the four best third-place teams will also advance. As Group C winners, Korea should face an easy game against the third-placed team from either Group A, B or F next Tuesday at Rashid Stadium in Dubai.

Son, who played a full 90 minutes for Spurs against Manchester United Sunday, admitted to being tired after staying on the field for 89 minutes against China.

“I’m a bit tired,” Son said after the game. “But it’s an honor to wear this red shirt and play for the national team. My first game of the tournament, a clean sheet, 2-0 - it’s a happy afternoon.”

Tired or not, Korean head coach Paulo Bento was happy to have Son back on the team.

“We are very satisfied with the effort that Son made,” said Bento. “What’s important in this moment for Son and the rest of the team is to enjoy this result and then go again.”

The team will now be able to recover for five days before returning to the field Tuesday. Bento and the rest of the Korean squad were due to find out who they will face next when the first-round games finished on Thursday night.