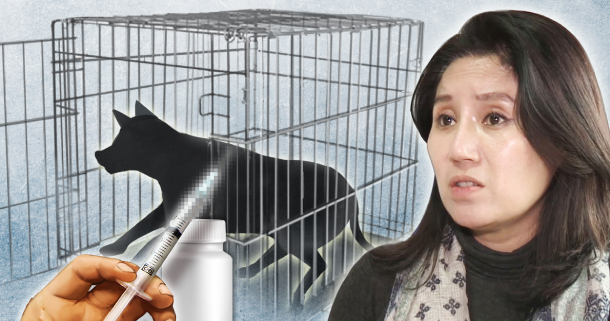 Park So-youn, a founder of the well-known animal rights group Care, is facing allegations that she illegally euthanized animals. [YONHAP]

The activists filed a complaint against Park, the head of Care, with the Seoul Central District Prosecutors’ Office following public scrutiny after she admitted to euthanizing animals due to a lack of shelter space. Park specifically advertised that her foundation did not euthanize rescued animals while asking for donations.

Members of the Korean Animal Welfare Association and the Freedom Korea National Defense Corps held a press conference Friday in Jongno District, central Seoul, and vowed to make sure Park faces an investigation.

“[According to a confession from a Care employee], Park ordered the euthanization of healthy pets,” said a representative from the Animal Welfare Association. “This is a clear violation of Article 8, Section 1 of the Animal Protection Act.”

This section of the act bans the euthanization of healthy pets.

Care, founded in 2002 by Park, grew popular in 2017 when President Moon Jae-in adopted a dog from the organization. It is one of the biggest animal rights groups in the country.

Fraud was added to their official complaint, as it is suspected that Park intentionally hid her actions in order to collect more money from donors.

“If donors knew that Care was euthanizing animals in their custody, then they would not have donated [to the organization],” said the representative. “The fact that she continued to accept donations is an act of deception.”

As for embezzlement charges, the attorney who represents the petitioners explained that “using donations which should have gone to taking care of the animals and instead spending it on killing and getting rid of animals counts as embezzlement.”

The attorney said the 33 million won ($29,430) Park took out from the foundation to hire a lawyer for legal counseling on her personal affairs in 2017 was embezzlement.

Trouble for Park first started earlier this month when a former employee of Care gave an interview to local paper Hankyoreh. Park admitted to the claims, but said she had no choice because the animals were “too savage or sick to keep in the shelter any longer.”

Care employees held a protest last Saturday to demand Park’s resignation. In addition, an online petition was uploaded to the Blue House petition board calling for an investigation into the alleged animal abuse. The petition had over 8,000 signatures as of press time.