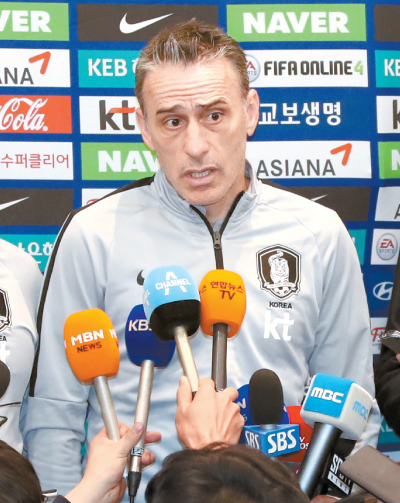 Head coach Paulo Bento and 12 players arrived at Incheon International Airport following their elimination from the 2019 Asian Football Confederation (AFC) Asian Cup in the United Arab Emirates (UAE). Ten players, including Tottenham Hotspur’s Son Heung-min, didn’t travel with the team as they returned to their respective clubs overseas from the Arab nation.

The Taeguk Warriors were looking for their first continental crown in 59 years, but their title bid ended in disappointment after losing 1-0 to Qatar in the Asian Cup quarterfinal match Friday.

That was Bento’s first and only loss with Korea since he took over the team in August 2018.

Korea passed the group stage with three straight wins over the Philippines, Kyrgyzstan and China. Bento’s team then beat Bahrain 2-1 in extra time to reach the last eight.

The national football team will assemble in March for two friendly matches.

One of them is a friendly against Vietnam, which is led by Korean head coach Park Hang-seo. The two sides will go head-to-head in Hanoi, Vietnam, on March 26. The KFA has yet to confirm the opponents for another friendly match in March.

Korea will play two additional friendly matches in June before they enter the second round of AFC matches for the 2022 FIFA World Cup qualification in September.

A total of 40 teams will compete in the preliminary round of regional World Cup qualification after they are divided into eight groups of five teams. The eight group winners and the four best group runners-up will advance to the third round of World Cup Asian qualification and will also qualify for the 2023 AFC Asian Cup final tournament.

For the future matches, Bento will try to solve problems raised at the 2019 Asian Cup. Korea dominated ball possession, but lacked precision and efficiency in attack, producing only six goals from 78 attempts.

Bento is also tasked with finding replacements for the team’s old guard. After the Asian Cup, Koo Ja-cheol announced his national team retirement, while Ki Sung-yueng and Lee Chung-yong are also expected to make their decisions soon.