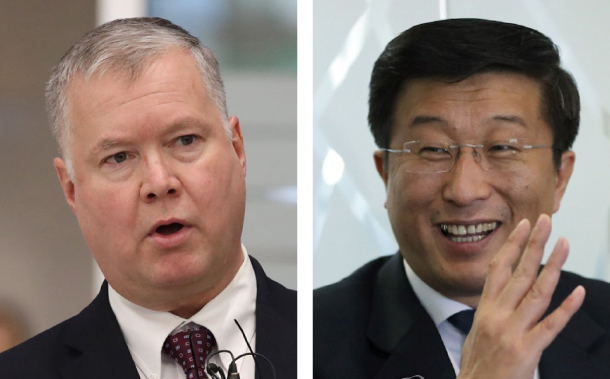 That promise was one of several agreements reached by South Korean President Moon Jae-in and North Korean leader Kim Jong-un last September in their third and most recent summit. The regime, however, has stayed quiet on the matter, as nuclear talks between the United States were deadlocked. The silence had left Pyongyang watchers wondering whether the regime would actually follow through and destroy the site.

The South Korean diplomatic source, who spoke on the condition of anonymity, said nuclear envoys from the three countries exchanged a to-do list last week in the outskirts of the Swedish capital of Stockholm as they were attending a so-called Track 1.5 international conference on denuclearization. The list was said to have outlined the tasks that each country promised to complete in the three summits between the South and North and the historic summit between the North and the United States last year.

In that process, the local source continued, Pyongyang said it was willing to carry out its promise to dismantle the Tongchang-ri missile engine test site and a launch pad while allowing outside experts to view the process. Whether a timeline was mentioned is not known. And Pyongyang also reaffirmed its will to dismantle the Yongbyon nuclear plant if the United States offers reciprocal measures, reiterating Kim’s promise to Moon in their last summit.

The three envoys agreed to continue further discussions in the near future.

The main participant from North Korea in the Sweden talks was Vice Foreign Minister Choe Son-hui. Stephen Biegun, the U.S. special representative on North Korea, and Lee Do-hoon, the South Korean Foreign Ministry’s special representative for Korean Peninsula peace and security affairs, were their countries’ main interlocutors. It was the first time Choe and Biegun met face-to-face after he was appointed as Washington’s nuclear envoy late last August.

As both countries prepare for a second U.S.-North summit in late February at a yet-to-be-disclosed venue, South Korean officials expect working-level talks between the two countries to take place anytime soon. Biegun could flesh out the details with a North Korean official other than Choe, given that U.S. Secretary of State Mike Pompeo recently said that Biegun’s North Korean counterpart has changed without explaining who the new representative was.

Last Tuesday in Washington, Pompeo said Biegun had the opportunity to meet with his “newly designated counterpart” when North Korea’s Kim Yong-chol visited the White House to hand-deliver a letter from leader Kim Jong-un to U.S. President Donald Trump. Biegun and his unidentified North Korean counterpart were “able to discuss some of the complicated issues towards achieving what the two leaders laid out back last June in Singapore,” Pompeo continued, referring to the first U.S.-North summit.

Kim Yong-chol led a delegation of about 10 officials from Pyongyang to Washington earlier this month. During his meeting with Trump, several new faces were caught on camera. Among them was Kim Hyok-chol, Pyongyang’s former ambassador to Spain. Kim Hyok-chol’s current position is unknown, but he was seen sitting close to Trump when Kim Yong-chol met the U.S. president at the White House, indicating to local officials that Pompeo was referring him.

Biegun’s new counterpart could also be Pak Chol, a former senior counselor at the North Korean Permanent Mission to the United Nations in New York, who was also seated close to Trump.

Yet even if Pyongyang appointed a new counterpart for Biegun, Yang Moo-jin, a professor at the University of North Korean Studies in Seoul, said that it doesn’t mean North Korean Vice Foreign Minister Choe will disappear from denuclearization talks for good.

“If she dropped out of [denuclearization] negotiations, why did she go to Sweden to meet Biegun in the first place?” said Yang. “Vice Minister Choe could show up at bilateral talks when both countries actually start to negotiate” the details of the second U.S.-North summit.

Yang added that Pompeo could’ve used the term “counterpart” just because a new face from Pyongyang appeared in the North Korean delegation.

After Kim Yong-chol delivered Kim Jong-un’s letter to Trump, the American president gave his own letter to the North Korean leader through Kim Yong-chol, though the letter’s content was never made public.

North Korea’s official Korean Central News Agency said last Thursday that Kim Jong-un expressed “great satisfaction” with a “good personal letter” from Trump. In an English version of the news report, Kim Jong-un was quoted as speaking highly of Trump for “expressing his unusual determination and will for the settlement of the issue with a great interest in the second DPRK-U.S. summit,” but it was unclear whether that remark was a direct response to Trump’s missive.

In that letter, Trump is said to have told Kim that he was willing to talk about “matters that interest North Korea,” a source in Seoul exclusively told the JoongAng Ilbo on Sunday.

Trump’s exact wording is not known, but Pyongyang has mainly been asking Washington to ease economic sanctions and formally end the 1950-53 Korean War, which ended in an armistice, not a peace treaty. The source, however, stressed that Trump did not mention anything about sanctions in his letter to Kim.

White House officials have stressed that sanctions will not be eased unless the North carries out final, fully verified denuclearization.

A South Korean government official said the regime knows this all too well to still be aiming for total sanctions relief.

Pyongyang could be asking Washington to lift sanctions when its actual goal, at least for now, has been to carry out cross-border projects with Seoul. The United States has trying to put the brakes on these projects after both Korean leaders agreed to several cooperative initiatives, according to the Seoul official.

The North has been especially keen to resume operations in the Kaesong Industrial Complex and restart tours to the Mount Kumgang resort. In his New Year’s address last Jan. 1, Kim said he was willing to resume operations at both venues “without any preconditions,” though it was Seoul who walked out of both projects.

After the speech was made, Seoul said it wasn’t considering resuming either project.