Can jang take off outside Korea?

Can jang take off outside Korea? 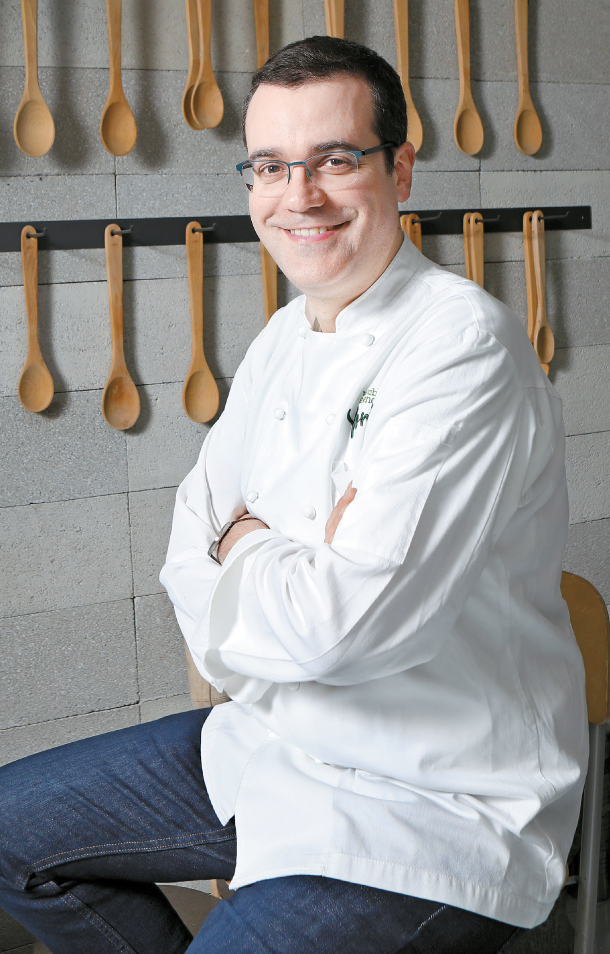 A table laden with side dishes of all shapes and sizes is an important part of Korea’s food culture. Apart from being visually satisfying and filling, these side dishes also ensure that Koreans get a lot more than their five a day.

Korea’s mountainous terrain has always made meat difficult to come by but, in turn, provided a wide variety of vegetables that grow differently by season and altitude. Thanks to imports, meat is not at all difficult to find these days, but the country still tops the list of OECD countries by vegetable consumption as of 2015.

“What caught my attentions from the chef’s eye was the side dishes made of roots and vegetables - they are seasoned with few ingredients, but all of them have a different taste. That combination is what makes the diet interesting,” Biarnes said during an interview with the Korea JoongAng Daily.

He projects that jang has the potential to take up a significant role in the global food market as vegetarian trends expand and a call to cut down on meat consumption in favor of sustainability is growing.

Below is an edited excerpt from an interview on Jan. 23 at the Sempio headquarters in central Seoul. Biarnes visited Seoul last week to hold a cooking class for foreigners on how jang can be used in non-Korean dishes including hummus, olio pasta and a mushroom Wellington. 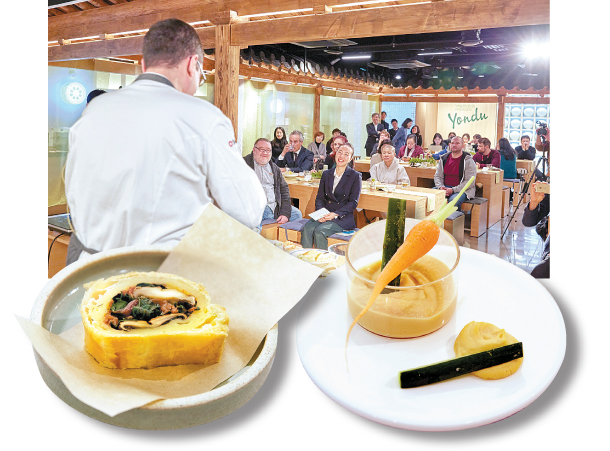 Above: Biarnes presents foreign dishes cooked using Sempio’s Yondu food seasoning at an event held at the Korean Food Promotion Institute in central Seoul on Jan. 22. Below: The mushroom Wellington, left, and low-sodium hummus served at the same event. [SEMPIO]

Q. You’re a Spanish chef with more than 10 years of experience in fine dining. How did you get so deeply involved with jang?

A. My former position was the head chef researcher at the Alicia Foundation, a research center in Spain that combines scientific research with food and cooking. In 2012, Sempio sent us seven jang products, asking for ways to develop Western dishes with them. Some of them had taste easier to understand while others, like doenjang, wasn’t. For the next five years I studied jang from scientific and cultural perspectives and got to understand how its method and environment fermentation makes it specific to Korea.

European countries have fermented vegetable dishes, too, like Germany’s sauerkraut, pickles or wine. There are other Asian countries that ferment soy beans, but you can instantly smell the difference that Korea’s jang is not similar to products in China or Japan’s soy sauce. The fermenting process involves activities of different microorganisms. The temperature, weather and the traditional practice of fermenting them in clay pots underground are also influencing factors.

A high consumption of vegetables is based on your landscape - 70 percent of the Korean Peninsula is composed of mountains, so a lot of the food you eat is plant-based. Korea also has four distinctive seasons, which gives it a variety of plant ingredients and in the past, a necessity to preserve food for winter. These different factors all contribute to Korean-style fermented dishes.

What about jang intrigues you the most?

Performance. What’s interesting is not the taste of jang itself but what it can do once it’s added to the dish. When I say jang brings out a “deep flavor” it means the dish lasts long in your taste buds after you’ve swallowed it, fulfilling your senses. This is why people love meat and why they call it “savory.” It’s easier to understand if you think of salad. Vegetables have a flat flavor, which means it’s light and quickly vanishes.

You said that jang can play a major role in future efforts to cut down on meat.

It hasn’t been long since humanity started consuming meat on a daily basis. We reached a peak in the last 50 years, but before that, it was only for kings and emperors. But this is not natural.

A lot of scientists are warning that we cannot continue this level of meat consumption - it’s not good for our health or the environment. But three generations have passed eating meat, and now the question is how we can make this transition. In our mindset, meat is food and vegetables are a doctor’s obligation.

I don’t want to talk about health effects - nobody will eat vegetables simply saying they’re better for your health. I want people to eat vegetables because they’re good. Korean soy bean fermentation is a very good asset for that because it adds savory and fulfillment. That’s why we teach people outside Korea how to cook using Sempio’s Yondu seasoning [a liquid seasoning made of fermented soy beans]. The thing about Yondu is that it’s not overpowering. After all, people can’t start from doenjang.

I see 20 years max consuming meat as we do now. In cities like Barcelona and New York, already, you see business meals in which young professionals don’t ask for meat. It’s becoming old-fashioned.

In 10 years, we’ll see a big change. Tax on meat consumption and its market price will go up, and we’ll go back to our normal pattern of eating meat once in a while.

What are you doing at the culinary studio in New York?

Our main work is developing recipes using Sempio’s Yondu essence with a focus on American preferences and teaching them to the local community. It opened last year, and so far, we’ve been doing very good. The first thing we did was visiting local neighborhoods door to door. We gradually spread word-of-mouth and now most of our cooking sessions are fully booked in advance.

But what we focus on here is not the number but the feedback: to understand what Americans need and what problems they face in eating day to day. Yondu is used for every dish, but we don’t try to sell it. My main question is how to teach families and children [to] enjoy vegetables at home.

The dishes we develop at the studio are not Korean but are foreign like the ones I presented at the event. This is not about teaching people how to cook bulgogi or bibimbap - it’s about expanding the idea of soy bean fermentation.

What’s the goal for the Yondu Culinary Studio this year?

Creating awareness, especially in New York. At this stage, we’re learning and promoting at the same time. This year will be a time to establish firm ground in this city. The reason we picked New York in the first place was because people here always have a craving for new ways to saturate their taste buds. They’re more open-minded when it comes to trying new food. You’re sure to find an early adapter of culinary trends here, including those that have high awareness on good food, health and wellness.

Our focus will remain on families. At the moment we’re not pushing sales of Yondu at the studio. Of course we want to sell more, but in the 21st century, business has to be honest and authentic.