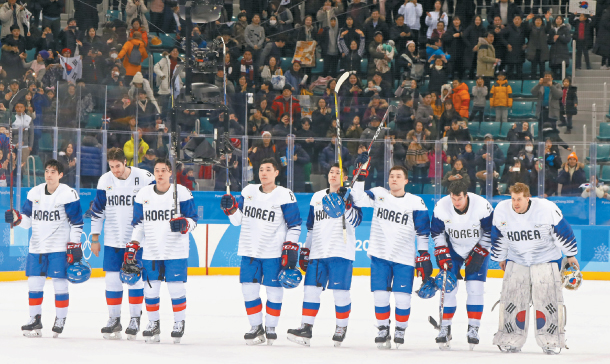 In this file photo from Feb. 20, 2018, players of the South Korean men’s hockey team salute the crowd at Gangneung Hockey Centre in Gangneung, 230 kilometers (143 miles) east of Seoul, after losing 5-2 to Finland in the qualification playoff match in the men’s hockey tournament of the PyeongChang Winter Olympics. [YONHAP]

Korea will host a four-nation men’s hockey tournament beginning this week, with an eye on earning a promotion back to the top-flight world championship.

Named the Legacy Cup, the tournament will feature host Korea, Latvia, Kazakhstan and Japan, from Wednesday through Friday. All matches will be played at Gangneung Hockey Centre in Gangneung, Gangwon.

The Korea Ice Hockey Association (KIHA) organized the event in celebration of the first anniversary of the 2018 PyeongChang Winter Olympics. Gangneung Hockey Centre was one of two hockey venues during the Olympics and hosted the men’s and women’s gold-medal games.

But it won’t just be a commemorative event for world No. 16 South Korea, which is gearing up for the 2019 International Ice Hockey Federation (IIHF) World Championship Division I Group A tournament starting in Kazakhstan in April.

It’s the second-highest level of the IIHF world championships. South Korea was relegated to Division I Group A after finishing last at the top-tier World Championship in Denmark last year.

Coached by former National Hockey League (NHL) defenseman Jim Paek, South Korea can return to the elite division by finishing in the top two in Division I Group A.

The first match of the Legacy Cup against world No. 11 Latvia at 6 p.m. Wednesday will be a good litmus test.

Latvia shut out South Korea 5-0 at last year’s World Championship. With former Stanley Cup-winning coach Bob Hartley behind the bench, Latvia also pushed the star-studded teams of Canada and the United States, before losing by just 2-1 and 3-2 in overtime, respectively.

The two are familiar foes. Korea defeated Kazakhstan 5-2 at the 2017 Division I Group A World Championship, en route to earning a promotion to the top division. Just before the PyeongChang Olympics, the two split their two exhibition matches.

Then at the Euro Ice Hockey Challenge tournament last November in Hungary, Kazakhstan prevailed 5-3. These two rivals will meet again at this year’s Division I Group A World Championship in April.

Korea will close out the tournament against Japan at 7:30 p.m. Friday. Japan used to have Korea’s number, but the tables have turned in recent years. Japan now sits seven spots below Korea in the world rankings, and Korea has won the last three meetings by a combined score of 10-1.