Korea’s investment in the services industry is lagging behind other developed countries’ due to weak private spending, a public trade research center reported Sunday.

According to a report released by the Korea Institute for Industrial Economics & Trade (KIET), Korea invested $4.59 billion into research and development (R&D) in the services industry in 2015, a figure lower than investment levels of many members of the Organization for Economic Co-operation and Development (OECD). The services industry refers to the sector of the economy that makes revenue by selling intangible goods and services, such as computer services and education. 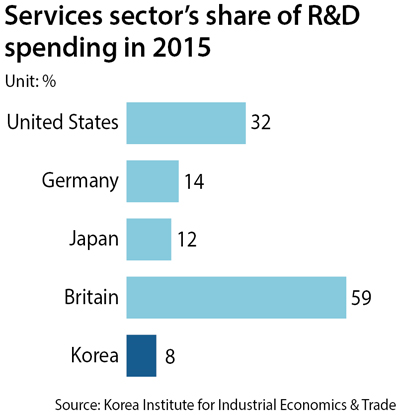 The United States invested over $104 billion in R&D in the service sector in 2015, over 20 times more than Korea, based on the most recent data available from the OECD’s Research and Development Statistics database. Similarly, Britain invested over $15.9 billion, Japan $14.7 billion and Germany $9.9 billion in services in 2015.

KIET found that Korea’s R&D investment in services as a percentage of total R&D spending was also relatively low.

“Given such low R&D spending, domestic R&D investments in the services industry do not produce positive or meaningful results in revenue and productivity,” KIET warned in the report, calling for action to be taken to improve investment levels.

KIET cited low private R&D investment spending as a key problem that needed to be addressed.

Government R&D spending in the services sector accounted for 11.3 percent of Korea’s total services R&D expenditure in 2015, while in Japan the government was responsible for 0.7 percent total R&D spending in services and in Israel, 3.2 percent. Though the Korean government did not invest more than the other countries in absolute figures, low domestic private spending had the effect of exaggerating the impact of public investments.

“We need to introduce various incentives, like tax exemptions, and relax regulations to encourage private companies to voluntarily make R&D investments in the service sector,” KIET analysts concluded in the report. “It’s also necessary to legislate on the development of the industry.”

Several bills regarding the development of Korea’s services industry have been submitted to the National Assembly since as early as 2012, but none have gained enough traction to be enacted into law as of yet.