The Samsung Lions have decided to dip into their impressive bullpen in an attempt to strengthen their starting rotation, naming Choi Chung-yeon as one of the team’s starting pitchers. 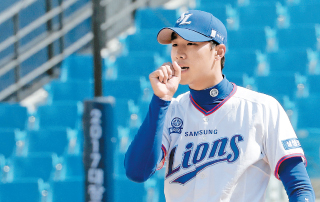 Throughout the 2018 season, the Lions were considered to have the strongest bullpen in the KBO, but weren’t too successful when it came to starters. Third-year KBO pro Choi played a big part in the bullpen’s success.

In 70 games throughout the 2018 season, Choi picked up two wins, six losses and eight saves with a 3.60 ERA. He played for the national baseball team at the 2018 Asian Cup and helped Korea win gold.

Despite his recent success in the bullpen, the Lions have decided to transform Choi into a starting pitcher.

“He’s young,” said manager Kim Han-soo before leaving for spring training. “He played pretty well last year and by playing at the Asian Games, he gained confidence. I’ll check his condition during the camp [to see if he can play the starting spot.]”

But this won’t be the first time Choi will play as starter. In 2017, Choi’s second season in the KBO, he played in six games as starter but wasn’t too successful, with a 10.44 ERA.

This year, Choi is expected to be a different player as he returns to the mound after a year of dominating the bullpen.

The following are edited excerpts from an interview with Ilgan Sports, an affiliate of the Korea JoongAng Daily.

Q. How does it feel to be preparing for the season as a starter at spring training this year?

A. I don’t really feel anything yet because I didn’t play in an actual game. Just like I did last year, I am slowly getting ready for the season.

What do you plan on improving throughout spring training?

I think I’ll need to add more varieties to my breaking ball. It’s different from when I was in the bullpen. Since I’m going to be a starting pitcher, I have to think about the speed of my fastball and the number of pitches. I don’t plan on adding another style of pitch yet. I’m focusing on elaborating on the pitches that I already use.

Do you have any regrets in not being able to be the Lions’ closer or continue as a bullpen pitcher?

Of course I do. I have great memories playing in that position last year. I’m preparing for the season feeling grateful for the opportunity to play as a starter.

Does it feel different preparing for the season as a starting pitcher?

Since I didn’t play in actual games, I don’t feel a big difference. I guess it’ll be a lot different when I start playing in real games.

Do you think your experience as a starter during the 2017 season would help you this season?

At the time, I didn’t really understand the role of starters so I couldn’t prepare for the position. I feel like I just got on the mound. So I told myself to be better prepared this season.

I would say the primary goal is to pick up my first win as a starter. This would be the starting point. Then I want to pick up wins consistently. My goal for spring training is to finish without getting injured.