2018 was good, but Park thinks she can do better

2018 was good, but Park thinks she can do better 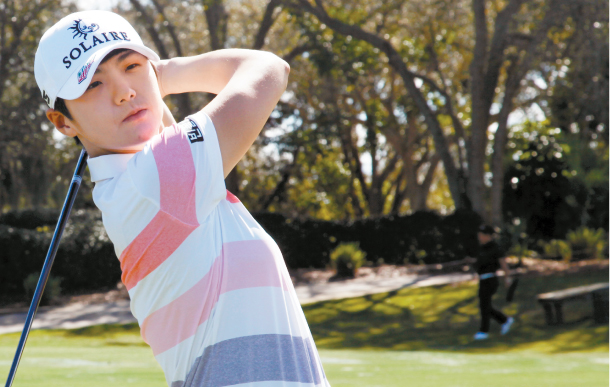 Park Sung-hyun will tee off her 2019 season today at Honda LPGA Thailand.

“I’ve had a lot of meaningful experiences,” Park said during a signing ceremony with her new main sponsor, Bloomberry Resorts and Hotels, last week. “This season, my goal is to win five tournaments, including the majors.”

The Honda LPGA Thailand is the same tournament in which Park began her 2018 season, but this year she is hoping for a better result. Although Park reached the No. 1 spot last year, she didn’t have the best start to the season, finishing tied for 22nd.

It wasn’t until May, at the Volunteers of America LPGA Texas Classic, that Park finally picked up a win. Following her first win of the season, she missed the cut in three consecutive tournaments, but in June she picked up her second victory of the season at the KPMG Women’s PGA Championship, a major tournament.

Then, by picking up her third victory of the season at the Indy Women in Tech Championship driven by Group 1001 in August, Park reached the No. 1 spot in the world ranking and maintained it until October.

Park finished the 2018 season second in the Rolex Player of the Year standing and third on the Official Money List. As Park had another solid season in her sophomore year, she is hoping to achieve more this year.

Changing main sponsor was also a big move for Park. She signed a two-year contract with Bloomberry Resorts and Hotels on Feb. 14, and will now ditch her signature Hana Bank hat for one bearing the logo of the Solaire Resort & Casino.

“Jutanugarn’s pretty tired of it too,” Park said. “But I think that the competitive relationship with Jutanugarn is a good thing for me. Even though she’s young, there’s so much to learn from her.”

“I learned a lot last year, we’ll play [together] a lot this year and the world ranking can change continuously. When I was training, I thought a lot about how I wanted to get back up to world No. 1. That kind of thought helped me a lot when I was training.”

Jutanugarn began her season a month ahead of Park. However, she wasn’t off to the best start. In the season opener at Diamond Resorts Tournament of Champions presented by Insurance Office of America, Jutanugarn finished tied for 18th in the 26 player field. At the recent ISPS Handa Women’s Australian Open, she barely made the two-day cut and finished 41st.

Although Park is off to a later start, she is more excited than she is nervous or worried.

“I’m very excited about the tournaments ahead of me, starting with Thailand,” Park said.

Park will tee off on the first hole at 9:39 a.m., along with 2019 ISPS Honda Australian Open winner Nelly Korda of the United States and Pornanong Phatlum of Thailand.

Along with Park, world No. 3 Ryu So-yeon will also start her season today. This is an unusually late start for Ryu as she started a month earlier last season.

Although Ryu’s season wasn’t as dramatic, in 2018 she still managed to pick up two victories by winning the Meijer LPGA Classic and Japan Women’s Open Golf Championships, a Japan Tour event.

Throughout 2018 she was one of the most consistent players on the Tour, finishing sixth on the official money list and not missing a cut in any of the 23 LPGA tournaments she competed in.

Ryu will start her round on the first tee at 10:01 a.m., along with Nasa Hataoka of Japan and Moriya Jutanugarn of Thailand.