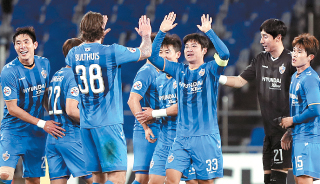 With the latest result, Ulsan has secured its spot in Group H at the 2019 ACL, where it will face Sydney FC of Australia, Kawasaki Frontale of Japan and Shanghai SIPG of China.

Ulsan, the 2012 ACL winner, had to go through a playoff round to reach the group stage after finishing third in the 2018 K League 1. Perak was the runner-up in the Malaysian Super League last season and earned its right to face Ulsan after beating Hong Kong’s Kitchee SC on penalties in their first-round playoff match.

Playing its first competitive match in 2019, Ulsan had to make its first substitution only seven minutes after the kickoff. Left winger Hwang Il-su sustained an apparent hamstring injury, and he was replaced by Kim In-sung.

Ulsan went up on the scoreboard first in the 23rd following a miscued clearance by Perak right back Amirul Azhan Aznan. After exchanging a brilliant one-two with Kim Bo-kyung, right back Kim Tae-hwan delivered a low cross in the box that was turned into an own goal by Amirul.

Ulsan had chances to double its lead with Kim In-sung’s middle range effort in the 26th and Junior Negrao’s left-footed shot in the 31st, but both attempts were denied by Perak goalkeeper Muhammad Hafizul Hakim Khairul Nizam Jothy.

In the 36th, Kim In-sung slotted home Junior’s headed pass from the end line, but his goal was disallowed by the referee, who ruled that the ball was out of play before the action.

Perak had its chance to get an equalizer in the 39th. Following a stray pass from Ulsan center back Dave Bulthuis, Perak’s Firdaus Saiyadi delivered a fine cross to his teammate Gilmar da Silva, but the Brazilian striker’s effort flew over the net.

Ulsan’s firepower exploded in the second half, starting from Diskerud’s brilliant individual effort.

Following a throw-in by Park Joo-ho, Diskerud, who joined Ulsan on loan from Manchester City, dribbled past Perak defenders in the box and fired a right-footed strike to double the hosts’ lead in the 56th.

Two minutes later, the American midfielder unleashed a powerful curler to get his second goal of the night.

With the three-goal cushion, Ulsan replaced Diskerud with Lee Dong-kyeong in the 66th. But this turned out to be a successful substitution as Lee found the net in the 70th with his left foot. Ulsan’s Brazilian striker Junior then made the score 5-0 in the 87th after receiving a pass from Kim In-sung.

Yet Ulsan couldn’t finish the match with a clean sheet after Perak’s Nazirul Naim Che Hashim hit the net from a tight angle with his left-footed strike in the 90th.