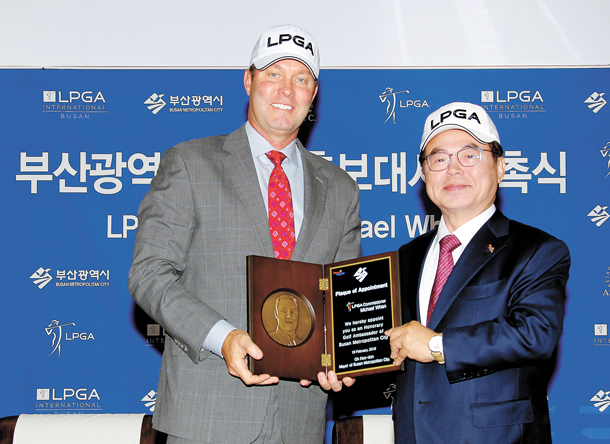 The head of the world’s top women’s golf tour has been named ambassador of golf for the Korean city of Busan.

The LPGA, headquartered in Daytona Beach, Florida, announced Wednesday that LPGA Tour Commissioner Mike Whan will serve as golf ambassador for Busan, the second-largest city in Korea. The ceremony took place in Busan on Tuesday.

Busan will host the LPGA’s BMW Ladies Championship from Oct. 24 to 27. It will replace the LPGA KEB Hana Bank Championship as the lone LPGA tournament on Korean soil.

The tournament will be played at LPGA International Busan, the first LPGA-accredited golf facility outside the United States.

The course used to be called the Asiad Country Club but was renamed following major renovations by renowned golf course architect Rees Jones and his company.

“I expect a lot to come of this new endeavor with Busan and I look forward to spreading the city’s spirit and energy as we travel the world with the tour,” Whan said in a statement released by LPGA. “Busan is a vibrant city with the catchphrase ‘Dynamic Busan,’ and that mirrors the LPGA Tour and how we showcase our own athletes’ dynamic performance and create memorable moments for our golf fans in every corner of the globe.”

The winner of the tournament will take home $300,000, and the total purse is $2 million. If a non-LPGA member wins the tournament, she will earn full-time privileges for the U.S. circuit for the 2020 season.

In 17 editions of the KEB Hana Bank Championship, five Korea LPGA (KLPGA) players were crowned champions and took their talents to the LPGA Tour the following season. The most recent one to take the route is Ko Jin-young, who won the LPGA event in 2017 and then captured the 2018 LPGA Rookie of the Year award.

The LPGA said it will use the new-look course to help grow the game in this region and Whan’s appointment should strengthen the LPGA’s business initiatives as it expands its global reach.

Koreans have dominated the LPGA Tour for years. In the current world rankings, four of the top-10 players are from Korea, led by No. 2 Park Sung-hyun. The country has also produced the past four Rookie of the Year winners.