Amy Yang gets another LPGA win in Thailand

Amy Yang gets another LPGA win in Thailand 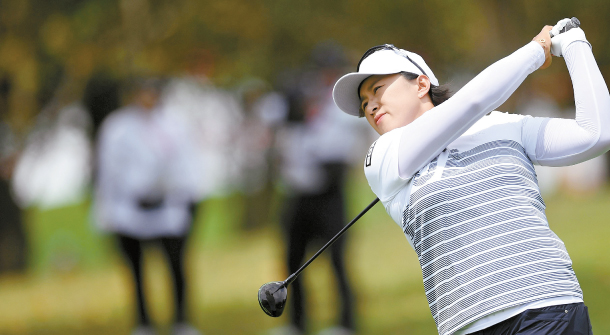 Amy Yang watches her shot during the final round of the Honda LPGA Thailand at Siam Country Club’s Pattaya Old Course in Chonburi, Thailand, on Sunday. [AFP/YONHAP]

Amy Yang picked up her fourth LPGA Tour title with a victory at the Honda LPGA Thailand on Sunday.

Yang, who is better known in Korea as Yang Hee-young, got off to a quick start to take the lead by making six birdies on her first nine holes. Impressively, Yang made five straight birdies from the par-3 fourth to par-3 eighth.

However, a lightning delay slowed her down. After about an hour delay, the players went back on the course and Minjee Lee of Australia and Carlota Ciganda of Spain slowly caught up with Yang. When Yang made a bogey on the par-4 14th and dropped to 20 under par, Lee and Ciganda quickly tied the lead as Lee made a birdie and Ciganda made a chip-in eagle on the par-4 15th.

But Yang stayed strong and was determined to win her long-awaited victory. On the par-3 16th, Yang hit her tee shot short of the green. She grabbed her putter from the fringe to add another birdie to her scorecard to regain the lead.

Then, as Lee missed her eagle putt on the final hole, meaning both Yang and Lee finished their round with a birdie, Yang ended up one shot ahead to win the tournament for the third time. Ciganda, who played ahead of Yang and Lee, was already out of contention.

“I was honestly very nervous, especially on the last three holes,” Yang was quoted as saying on the LPGA website. “It was [a] tough hole to finish. I was really telling myself just [to] be patient, do [my] best at the time.”

“I tried to stay calm and stayed patient out there,” Yang was quoted as saying. “I just enjoy coming here. I love the course, which is why I always play well here.”

Unlike other top-ranked golfers, Yang hasn’t had much luck in terms of wins. Since her LPGA Tour debut in 2008, she has won four titles, including the one from this weekend in Thailand.

Yang made her professional debut through the Ladies European Tour (LET), when she won the ANZ Ladies Masters as an amateur at age 16. After she won the tournament, LET offered Yang a special three-year membership exemption starting from the 2006 season despite only being 17 years old. She then earned her conditional status on the LPGA Tour by finishing 37th on the Tour’s Qualifying School in December 2007.

Before earning her full-time status on the LPGA Tour in 2008, Yang won three titles on the LET.

Although she made her LPGA Tour debut in 2008, it wasn’t until 2013 that Yang picked up her first win, at the LPGA KEB-Hana Bank Championship, which was co-sanctioned by the LPGA and the KLPGA tours. Then, after a winless 2014 season, Yang picked up her second win at the Honda LPGA Thailand.

In 2016, Yang once again spent the season without a victory but still boasted an admirable performance. Yang managed to get her world ranking up to sixth place in May 2016 to be eligible for the Rio Olympics. Even at the international event, though, she missed out on the podium, finishing fourth.

Yang once again picked up a win in Thailand in 2017 and then nothing in 2018. However, she still had a solid season, recording eight top-10 finishes. With anther consistent year, Yang finished 24th in the Official Money List and 19th in the Race to CME Globe Season ranking.

As Yang has once again won in Thailand for the third time, she is off to a quick start this year, ranking third in the Race to CME Globe Season ranking and second in the Official Money List. Victory in Thailand allowed Yang to take home $240,000 in prize money.