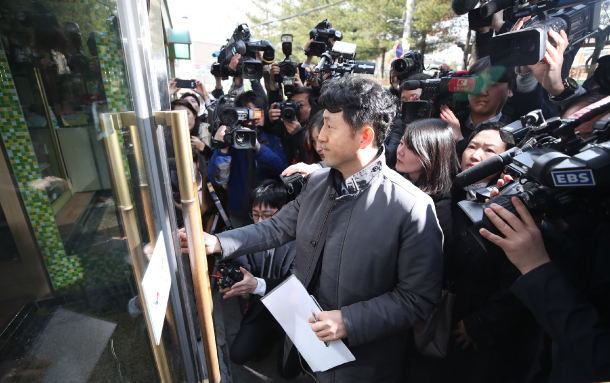 An official from the Seoul Metropolitan Office of Education on Monday checks whether a kindergarten in Dobong District, northern Seoul, was shut down on Monday, the start of the spring semester, to protest the government’s plan to toughen oversight of private preschools. [YONHAP]

Hundreds of private kindergartens across Korea refused to start classes on Monday to protest the government’s plan to toughen oversight over them, leaving parents scrambling to find a temporary solution.

In the North Gyeongsang city of Pohang, 35 out of 58 private kindergartens postponed classes, leaving the 4,537 children attending these kindergartens without a place to go in the morning.

“The kindergarten my child attends sent me a text message about closing down for the day without an explanation or information on what parents should do to find other help,” wrote a user in an online community of residents of Pohang. “I called them numerous times but they did not pick up.”

“Even if they decide to hold classes again, I don’t know if I can trust them anymore with my child,” said Kim Eun-jung, a 35-year-old Pohang resident.

The Education Office of North Gyeongsang divided the 4,537 children into groups and allowed them to attend public kindergartens for the day.

In Seoul, 21 out of 606 private kindergartens refused to hold classes for the day. In Daegu, 43 out of 236 closed their doors. In Busan, it was 34 out of 290, according to local education offices.

Except for Pohang, most private kindergartens, while refusing to hold classes, still provided day care, allowing the parents to drop off their children at the institutes in the morning.

Out of the country’s 239 private kindergartens that refused to hold classes Monday, 221 accepted children and took care of them during the day, according to the Education Ministry.

“The push by KKA to postpone spring semester classes at private kindergartens is illegal and infringes on the rights of children to education,” said Minister of Education Yoo Eun-hae in a meeting at the Yongin Education Office in Gyeonggi. “We hereby demand the kindergartens to revoke their decision to postpone classes.”

The superintendents of education in Gyeonggi, Seoul and Incheon in a press conference Sunday said that they will request criminal investigations into the private kindergartens should they refuse to hold classes on Tuesday.

Private kindergartens can be criminally prosecuted if the Ministry of Education issues a directive to commence classes and the kindergartens refuse to follow.

The head of a private kindergarten found guilty can receive a prison sentence of up to a year or be fined 20 million won ($17,770).

After the scandal broke, Park proposed a sweeping bill that would revise the acts on school meals, private schools and early childhood education to overhaul public funding for private kindergartens and make accounting more transparent at these institutes. The plan would force them to subscribe to an online system that reveals their accounting data to state auditors.

Park’s bill, as well as the Education Ministry’s own plan to build hundreds of new public kindergartens across the country, prompted a backlash from the KKA, which urged the DP and the government to retract the bill.

“The Ministry of Education is doing all it can to make it seem like what we are doing is illegal,” the KKA said in a press release on Sunday night. “But our protest is completely legal.”

But by Monday afternoon, the KKA folded and said it will stop pushing private kindergartens to postpone classes.

“We hereby end our protest without any condition,” the KKA said in a statement on Monday.

“The association apologizes to anyone who was troubled by the postponement of classes at kindergartens. We hope each private kindergarten will decide to commence classes from Tuesday.”

The KKA’s head, Lee Deok-sun, said in a press conference Monday that he realizes his responsibility for the events and that he will likely resign from his position in the association.

The KKA had been arguing that the postponement of classes is legal as long as the kindergartens hold the minimum of 180 classes in the year in accordance with the Early Childhood Education Act.

But according to the Education Ministry, if the kindergartens decide to postpone their starting dates without going through consultations with parents, it would be a violation of the Early Childhood Education Act, and if the KKA forces its members to shut down, this would violate the Fair Trade Act.

Seoul Education Office said on Monday it will begin a process to revoke the KKA’s certificate of incorporation.