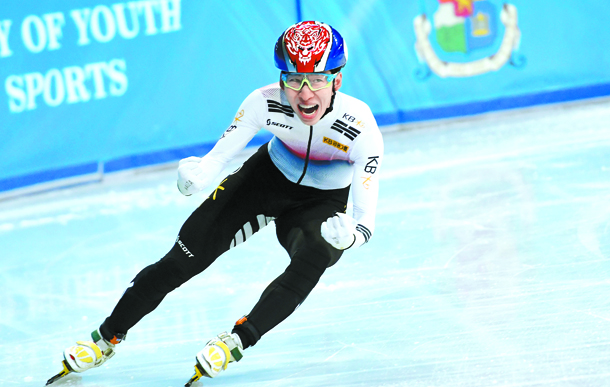 “I came to the World Championships for the first time last year and finished fourth, so I am really happy to win this time,” Lim was quoted as saying on the ISU website. “And it is great that my teammate got second place. On the ice, we always try to win and beat each other, but off it we are friends.”

Hwang, too, had a strong finish to the season, winning gold in the men’s 500 meters and picking up silver in the 1,000-meter race. Hwang competed for the overall title in the 3,000-meter super final race along with Lim, but as Hwang was penalized in the race, he had to finish this year’s championship as runner-up. However, with Hwang’s gold in the 500-meter race, the Korean men’s team swept gold in all the individual races at this year’s world championships.

“Next time, I want to prepare better and win,” Hwang was quoted as saying. “But as a teammate, I am happy for [Lim]. We learn from each other. And now we have to go back to Korea and compete for the national selection.”

As only the top Korean skater who finishes within the top three in the overall standing automatically earns a spot on the national team for the next season, Hwang will have to qualify again for the Korean national team.

This year, the men’s team made a successful generation change. Six skaters are ranked inside the top 10, and four of them are the top four skaters in the world ranking. Hwang was the lowest-ranked Korean skater heading into the race, at 10th.

The women’s team wasn’t as dominant as the men’s team this year, but Choi Min-jeong still made an impressive comeback from her injury at the world championship. She won gold in the 1,500-meter race and silver in the 1,000 meters and 3,000 meters super final.

From the three races, Choi earned a total of 76 points, five points behind the winner Suzanne Schulting of the Netherlands. By finishing second in overall standing, Choi earned her spot on the Korean national team for the 2019-20 season.

“I am happy,” Choi was quoted as saying. “I got a heavy injury [this season], so I did better than I thought I would. It is a very tough ladies’ field that is not easy to win. I like having good rivals, and them being so good makes me improve.”

Although Choi failed to win her fourth world championship overall title, it was a good comeback for, as she struggled earlier in the season with injuries during the third leg of the World Cup race in December last year. Choi had been rehabilitating as she competed.

“I am confident going forward that I can win more,” Choi was quoted as saying. “I want to win lots and lots, again and again.”

Finishing the tournament strong, the men’s and the women’s teams both won gold in the relay races.