The KBO preseason exhibition games kicked off on Tuesday with less fanfare than previous years. Baseball fanatics were just as excited to see the sport return, but watching the games proved surprisingly difficult this year. 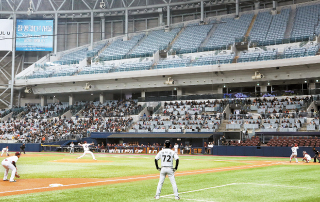 The Kiwoom Heroes play an exhibition game against the LG Twins at Gocheok Sky Dome in western Seoul on Tuesday. [NEWS1]

As baseball is one of the most popular sports in Korea, the exhibition games are typically watched live by legions of fans. However, five days before the exhibition games kicked off this year, the three major broadcasting companies - KBS, MBC and SBS - whose subsidiaries broadcast games live jointly decided not to.

Their main reason behind their decision was reportedly to reduce costs. It costs about 25 million won ($22,062) to broadcast an exhibition game and broadcast companies are reliant on advertising to cover the costs. The three broadcasters struggled to sell enough advertising space to make the deal worthwhile, so pulled out.

Just a few days later, SPOTV, which also has broadcasting rights, pulled out and fans were left with no TV channels broadcasting the exhibition games.

Falling advertising revenue during preseason fixtures isn’t a new phenomenon, and the TV stations’ decision to pull out didn’t come as a huge surprise. The timing proved controversial, however, as the decision came just a week after the broadcasting companies were seemingly sidelined by the KBO.

A consortium of Naver, Kakao, LG U+ and SK Broadband was named preferred bidder for the main broadcasting rights by the KBO on Feb. 25 after offering a record-breaking 110 billion won ($97.3 million) for a five-year deal. As the new consortium, made up of internet and telecoms companies, won the bid rather than the television channels, some fans suspected that the decision not to show the exhibition games was retaliatory.

When the decision was first announced, some clubs said they would broadcast their own games online. The KBO originally rejected the idea as the broadcast rights belong to the media companies.

However, things once again took a turn at the last minute. The clubs eventually were permitted to broadcast their own games, using YouTube Live in lieu of a TV channel.

The teams installed a camera or two and had their own reporters add commentary. Although the footage wasn’t necessarily as high quality as a TV broadcast, fans still visited their team’s YouTube channel to watch the games. The live stream also allowed fans to communicate with each other in real time.

The Lotte Giants was the first team to use YouTube Live. During their first exhibition game against the NC Dinos on Tuesday, the accumulated views of the live game reached up to 1.1 million.

Then, on Wednesday, all five games were broadcast live on YouTube. Rather than sneaking in advertisements in between innings, reporters used the breaks to talk about upcoming season. The clubs said they didn’t add advertisements because this was done for fans, not for profit.

The game between the SK Wyverns and the Kia Tigers was hugely successful, peaking at 16,000 views during play for an accumulated 1.5 million viewers.