With the 2019 KBO season starting Saturday, it’s time to practice plays and fine-tune pitches. The Hanwha Eagles, however, are facing issues off the field that leave them with an unexpected lineup just days before the games begin. 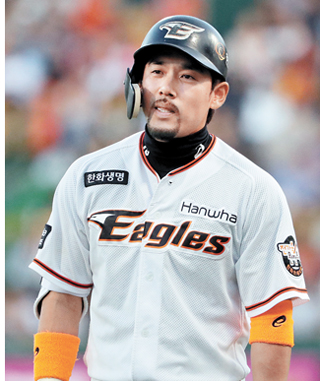 Lee Yong-kyu of the Hanwha Eagles reacts during a game against the Doosan Bears in May 2018. [YONHAP]

Eagles outfielder Lee Yong-kyu, who re-signed a two-year contract with an option of another year as a free agent (FA) player on Jan. 30, has requested the club release him for a trade. Right before the exhibition game, Lee had a one-on-one talk with manager Han Yong-duk and on Friday, Mar. 15, he had another talk with the club’s front office.

Yet the Eagles denied Lee’s request. He decided to go public and announce that the club was blocking his transfer.

The next day, Lee was demoted to the developing team squad.

Lee’s demotion to the developing team is essentially him being banished for the season. The club has excluded him from the lineup completely, so he is not even eligible to play in the Futures League right now.

Although Lee didn’t specifically mention the reason behind his request, it could be due to his new position. Lee, who was the Eagles’ leadoff and a center fielder, has been continuously assigned as ninth batter and a left fielder for the majority of spring training.

When Lee re-earned his FA status, his contract guaranteed him an annual income of 400 million won ($350,000) with an incentive of another 400 million won and 200 million won as a signing bonus. If he fulfilled the option and earned the additional year, Lee could have earned up to 2.6 billion won.

Lee accepted the Eagles’ offer and headed straight to Okinawa, Japan, the next day to join the team’s spring training. But in less than two months, he asked the Eagles to let him leave.

This isn’t the first time something similar has happened to the Eagles.

Bae was added to the Eagles’ starting roster on June 5, 2018, but after picking up a loss against the Twins, he was quickly sent down to the Futures League and never made his way back up to the KBO. Once the season ended, Bae refused the club’s request that he retire and was released, eventually signing with the Bears.

Those weren’t the only disgruntled players in the Eagles’ eyrie.

Right before the Eagles began their offseason training, they fell out with left-handed pitcher Kwon Hyuk. As Kwon was told to join the Eagles’ second division camp rather than its top team, he asked to be released. Kwon also signed with the Bears, but won’t be able to play until after May 1 as he signed after the Jan. 31 deadline.

Since Han was appointed as Eagles manager, he has concentrated on developing young players to make a strong team in the long term. As a result, this year’s club took seven rookies to spring training.

For this reason, Lee and other veteran players have slowly been squeezed out.

While the club parted with most of its veterans, Lee is still an important member of the Eagles’ lineup. Despite this, the club still sent Lee to the development team to stop his conflict with the management having a negative effect on other players.

“We will need a follow-up action but we need to approach it very carefully,” said Eagles general manager Park Jong-hoon. “We’ll have to look into the situations of our front office, the field staff and Lee Yong-kyu.”