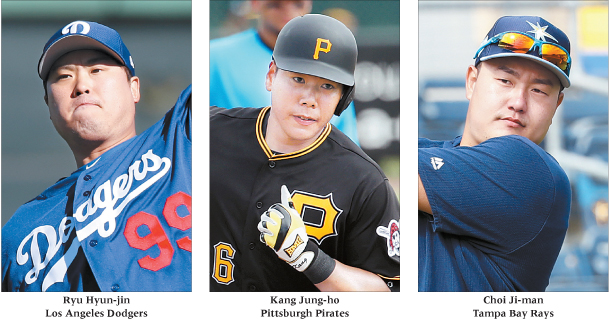 There’s exactly one week left until the official start of the 2019 MLB season, with five Korean players looking to make a mark in the big leagues this year.

Although the opening weekend of the 2019 MLB season isn’t until March 28, the season actually started early with a two-game series between the Oakland Athletics and Seattle Mariners at Tokyo Dome in Tokyo on Wednesday.

Although all 30 teams will play opening games on March 28, the score from the Opening Series in Japan will count, meaning that either Oakland or Seattle will get to spend a week uninterrupted at the top of the table. The MLB decided to host the game in Japan because of baseball’s popularity. There has been some talk of adding a Japan game to the regular season schedule.

Of the five Korean big leaguers, Ryu Hyun-jin of the Los Angeles Dodgers is getting the most attention. After a successful 2018 season, picking up seven wins and three losses with a 1.97 ERA, Ryu is showing solid performance in the lead up to the 2019 season. In the 10 innings he pitched in spring training games, Ryu only gave up two runs with nine strike outs and no walks.

Ryu has shown power in his pitching, tossing his fastest at 92 miles per hour in the preseason games.

Ryu is expected to start in the Dodgers’ four-game series season opener at Dodger Stadium, which starts from March 28 to 31. As manager Dave Roberts announced on Monday that starter Clayton Kershaw will not play in the opening game, there is a chance that Ryu may be the starter on opening day.

Along with Ryu, Kang Jung-ho of the Pittsburgh Pirates is set to make his return to the big leagues for the first time in almost two seasons. After missing quite some time due to drinking and driving charges, Kang has wasted no time in proving his worth in spring training games. As of Tuesday, Kang has a .179 batting average with five hits. Although his batting average is unimpressive, he has shown impressive potential as a slugger as all five of his hits were home runs.

Kang also showed strength in defense. While Colin Moran, who was the Pirates’ third baseman last season, made four errors, Kang made only one. As a result, he will reportedly be third baseman for the opening game.

Choi Ji-man of the Tampa Bay Rays is also expected to find a spot on the starting roster this year. For the past few seasons, Choi has been fiercely competing to get added to the starting entry, but has fallen out of contention at the last minute every time. This season he is expected to secure a spot.

In the preseason games as of Tuesday, Choi has a .379 batting average with one home run and five RBIs. In addition to his at bats, Choi has also shown improvement in his defense.

In the batting order, Choi is likely to be assigned as third batter.

While the three big leaguers are looking strong for the upcoming season, the two older players aren’t all set for the season.

Last season, Choo Shin-soo of the Texas Rangers had an impressive .293 batting average and 18 home runs in the first half of the season. Along with his home runs, he made headlines with an on-base streak that ended at 52 games. However, his disappointing second half of the season quickly led him to be forgotten by fans. In the second half, Choo had a .217 batting average with just three home runs.

Then, to make matters worse, Choo was unable to play in all the scheduled preseason games because of shoulder pain. As of Tuesday, Choo had a .222 batting average and was given five walks in 11 games. He was struck out seven times.

This season, Choo is likely to be the Rangers’ leadoff.

Along with Choo, Oh Seung-hwan of the Colorado Rockies had been inconsistent in spring training. After a solid start, Oh struggled in the next three games, giving up eight runs. This led his ERA to skyrocket to 19.64. Yet by tossing scoreless innings in four consecutive games, his ERA went down to 9.82 as of Tuesday.

Like last year, Oh is once again expected to be the Rockies’ setup man. Oh is only one save away from the 400th of his career.