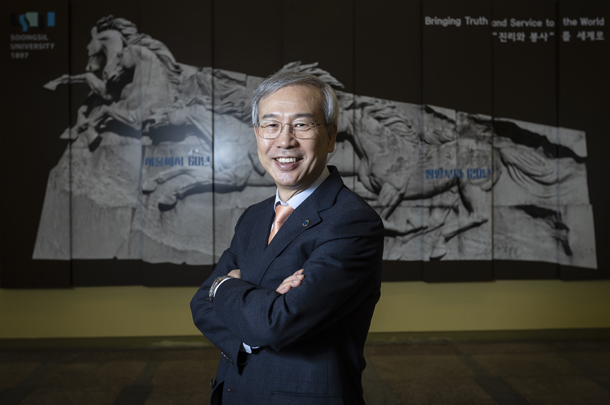 The university was once in the capital in the North, and its name comes from the Soongsil School on the bank of the Taedong River, founded by missionary W. M. Baird in 1897. In 1908, it became a four-year college, but was closed in 1938 for refusing Shinto worship, which was forced on Koreans during Japan’s colonial rule of Korea (1910-45). The school was reopened in Seoul in 1954. Since then, the school has been waiting for the day it can return to its homeland.

Below are edited excerpts from his interview with JoongAng Ilbo.

Q. The situation within Korea and your plans to build another SSU in Pyongyang seems to be interconnected. What do you think about the current situation?

A. The nuclear weapons in the North and civilian education should be approached separately. Instead of looking at it as a variable wavering with each political issue, it should be seen as a constant. As the president, I would like to see [cases of] academic and physical education exchanges between the countries. We need to create various measures for this.

Being at the scene in 1989, how did you feel as you saw the Berlin Wall fall?

I was moved and felt a lump in my throat when I was there in November 1989. The wall was just 800 meters (874 yards) to 900 meters away from the dormitories of the Free University of Berlin. I saw people smashing the wall with a pickaxe when I arrived at the source of the big commotion. At that moment, I thought about the 38th parallel and our fellow countrymen in the North. I realized that unification could be achieved in this form. We should always be preparing for it.

In our current situation, what can we learn from Germany?

We need to learn from their policy of trade, exchanges and liaisons, which lead the way for the country’s unification over 20 years. It took an additional 25 years to reap the benefits of being united. It will be harder for us. We will need patience, perseverance and the will to embrace the North, including the expenses that will come with unification.

Why will SSU be leading the way towards unification between the two Koreas?

It is because the school has its roots in Pyongyang. Even Kim Jong-un’s great-grandfather, Kim Hyong-jik, studied there from 1911 to 1913. That is why we plan to establish a memorandum of understanding with the Kim Hyong Jik University of Education in Pyongyang.

We even launched a Pyongyang-Soongsil reconstruction research institution in November 2017. The executive committee is carrying out plans according to its five-year road map. The idea is to make a branch school in Pyongyang before the unification of the two Koreas and, after unification, make it the main campus. We even set aside a budget for reconstruction, which is quite substantial.

What kinds of unification education does SSU offer?

Does SSU have a strong background in start-ups and the information technology industry?

The Soongsil School in Pyongyang was the start of our strength in technology education. They built an industrial shop in 1902. From there, students learned professional skills such as carpentry, iron working and casting. SSU was also the first university in Korea to have IBM computers in 1969. The reason for creating the department of electronic computing was in line with our frontier spirit. We continue to maintain this pace as a frontier with [the creation of] our Graduate School of Small and Medium Business in 1983, Graduate School of Information Sciences in 1987 and College of Information Technology in 2005.

The history of seeking new frontiers did not necessarily bring success.

I admit that we did not have the best plan for the future, but our fourth industrial revolution will be different. An era of model students managing their qualifications and depending on one’s university name is over.

If you want those kinds of individuals, you would have to flip the current education system. How will you do this?

We introduced a do-it-yourself fusion major two years ago. It is a course where students choose their own subjects and get the university’s approval. Not only can they take classes in Korea, but they can also study overseas as exchange students.

With this course, a broad number of new majors were made that translate to “Internet of Things network,” “science philosophy” and “ubiquitous medical engineering.” All kinds of knowledge can be found on the internet. That is why we are changing our classes to project-based learning or problem-based learning. Through this, the four Cs can be created: creativity, critical thinking, communication and collaboration.

What do you mean by making SSU the “Babson College of Korea?”

In this era, start-ups and creators are needed more than office workers. Babson College burrowed into the niche between Harvard and the Massachusetts Institute of Technology. Students who want to become entrepreneurs often go to Babson. I want to make SSU that way.

Babson College was founded in 1919 and focuses on start-ups, management, entrepreneurship and a business mindset education. Although they have only about 2,300 students, they have one of the best curriculums within the United States.

The school’s Master of Business Administration was selected as one of the top colleges in “Forbes America’s Top Colleges” list for 21 consecutive years. With the percentage of alumni creating start-ups at 17 percent, the college’s start-up rate is higher than Stanford University’s 13 percent, Harvard’s 7 percent and Columbia’s 5 percent.

How do you plan to foster entrepreneurship?

From this semester, all 3,000 freshmen will take an entrepreneurial thinking class. It is the essence of start-up education. Through online classes, students study and practice what it takes to become an entrepreneur.

We also plan to hold an idea competition and push forward with the “7+1” challenge semester. Students study for seven semesters and in the remaining one they are freely allowed to do internships or get work experience from abroad.

Through these experiences, their working capacity and confidence will improve.

It is hard for students to create their own start-ups as there is a high risk of failure. Do you have any solutions for this?

It will be hard for the students. That is why we have created the “Start-up Pump venture studio” that offers students consultations with staff.
For 45 of the school’s majors, we have also implemented Capstone Design (a program that aims to cultivate talented individuals with creative comprehensive planning skills).

In the program, students are grouped into teams for one semester and experience a comprehensive project from its planning to production.
This will be implemented in all departments by next year. With this, the boundaries between majors are shattered, which leads to their fusion.