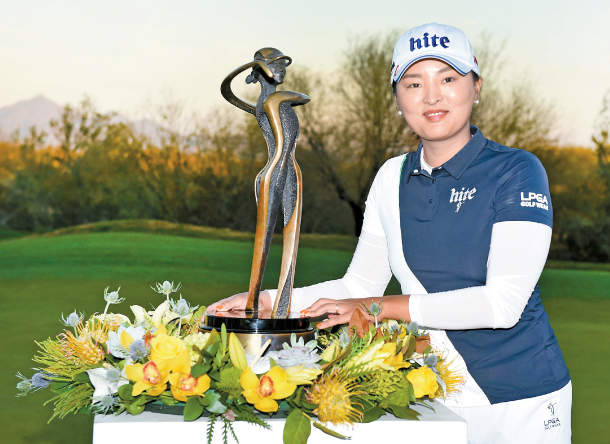 Ko Jin-young picked up her first win of the season at the Bank of Hope Founders Cup in Phoenix, Arizona, on Sunday.

Ko, who started the final round four shots behind the leader, rallied on the final day by shooting a bogey-free round of seven under par, 65, to win one shot ahead of the runners-up. Ko finished the tournament at 22 under par, 266.

After making three birdies in the first nine holes, Ko continued her momentum in the back nine to give herself a shot at the lead. Having made another birdie on the par-5 11th, Ko made three straight birdies, from the par-3 14th to par-4 16th, to take a sole lead. However, Liu Yu of China, the overnight leader, quickly responded with a birdie to tie in first place.

As Ko finished her round before Liu, Ko had to wait for the very last group to finish its round. Then, on the last hole, Liu missed the green in two and, as she failed to make an up and down for a par, Ko was declared the winner, finishing just one shot ahead of Liu, Jessica Korda and Nelly Korda of the United States and Carlota Ciganda of Spain.

“Last year I think too much, so I lose a little bit [of] confidence,” Ko was quoted as saying on the LPGA website. “But my friends told me, ‘You can do it.’ Also, my manager and my parents, my caddie, all people [said], you can. So I got lots of confidence for this year. Really good for third win in the States, so I’m really happy.”

“[Jennifer Song] told me Dustin hit so bad and he didn’t get angry - [he] put [his] clubs in the bag and just walks,” Ko was quoted as saying. “So, I tried [to be] like Dustin yesterday and today. I just tried no angry, no happy, just focus.”

Although Ko has won three LPGA Tour events throughout her career, interestingly, this is the first time that she has won in the United States. With the win, Ko took home $225,000 in prize money. Her win also allowed Korean golfers to continue their dominance this season - of the six LPGA tournaments so far this year, Korean golfers have won four.

The victory at the Bank of Hope Founders Cup is a lot more meaningful as the tournament is hosted as a tribute to the founders of the LPGA. Three of the founders - Shirley Spork, Marilynn Smith and Marlene Hagge - sat by the 18th hole of the Wildfire Golf Club at JW Marrior Phoenix Dessert Ridge Resort & Spa to watch the golfers finish their rounds.

”I want to say thank you to the founders,” Ko was quoted as saying. “I wouldn’t have won if there were no founders here, because if they weren’t here, we [wouldn’t] have a chance to win on this Wildfire Golf Course. I really want to appreciate the founders and all the girls out here today and for the weekend.”

“Lots of players think if there is a [flag], the ball might hit it and come out,” Ko was quoted as saying. “I think it’s great to put the [flag] in because it makes it easier for me to putt because it is a small target.”

Ko, who turned professional in 2013, joined the LPGA Tour after a successful career on the KLPGA Tour, where she won nine tournaments over four seasons.

Throughout the 2016 season, when world No. 1 Park Sung-hyun dominated the KLPGA Tour by winning six tournaments, Ko was considered her biggest competition, winning a total of three. When Park moved to the LPGA Tour, Ko was considered the player to beat in the KLPGA.

The 2019 LPGA Tour will continue in California at the Kia Classic from Thursday to March 31.