Kang Jung-ho’s spring power surge has continued, with the start of the regular season just a few days away. 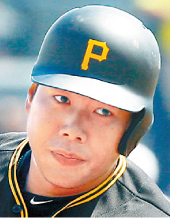 Kang broke the tie with Aaron Judge of the New York Yankees in the long ball category. Kang is batting .238 (10-for-42). Nine of those 10 hits have gone for extra bases - seven home runs and two doubles - for a slugging percentage of .786.

Kang’s home run Sunday was a solo shot off Baltimore starter Andrew Cashner in the top of the first inning. The teams ended in a 1-1 tie.

Kang was named the team’s starting third baseman last week. The Pirates open their regular season against the Cincinnati Reds on the road Thursday.

The 31-year-old has been given a new lease on his baseball life by the Pirates after missing all but three games over the past two seasons due to his legal problems in Korea.

He was caught driving under the influence of alcohol in Seoul in December 2016 and received a suspended jail term the following year. Kang was unable to secure his U.S. work permit for 2017 and didn’t play a game that year.

The infielder got his visa in April 2018 and returned to the big leagues for the final regular season series last September.

And following the end of the season, the Pirates declined Kang’s $5.5 million option after his four-year, $11 million contract expired and instead signed him to a new one-year deal in free agency, reportedly worth $3 million, plus $2.5 million in performance bonuses.