The new head of the interest group for Korean professional baseball players said Monday he will try to improve the plight of minor league players. 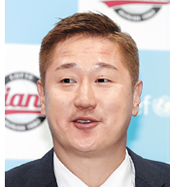 Lee Dae-ho of the Lotte Giants in the Korea Baseball Organization (KBO) was inaugurated as the new president of the Korea Professional Baseball Players Association (Kpbpa).

The Kpbpa, which is not a union, hadn’t had a president since Lee’s predecessor, Lee Ho-jun, stepped down in April 2017. Lee Ho-jun retired as a player later that year.

The top three players in salary from each of the 10 KBO clubs were nominated for the presidency. Lee Dae-ho, the KBO’s highest-paid player with 2.5 billion won ($2.2 million) in annual salary, came out on top in the players’ voting. The Kpbpa didn’t disclose detailed voting results, but said Lee “won overwhelming support.”

At his inauguration press conference in the Giants’ hometown of Busan, Lee said, “Rather than working just for the interests of the association, I will try to put our fans first.”

“I’ll try to guarantee the rights and interests of the minor league players and strengthen our communication with fans,” Lee added. “In this position, I have to consider my fellow players, clubs and fans. I will try to act as a bridge to help make baseball a beloved sport and schedule autograph signings and other events to bring fans closer to the players.”

In particular, Lee said he wants to improve conditions for players on the low end of the pay scale and adopt free agency for minor leaguers.

Korea’s minor league, the KBO Futures League, serves as a farm league for the KBO. Futures League clubs are largely overlooked by fans, and players enjoy little support or publicity. Their career prospects are almost completely dependent on getting called up to the KBO.

Lee’s term is for two years.

The 36-year-old is a two-time batting Triple Crown champion and the 2010 regular season MVP.

He returned to the Giants in 2017 and was their captain for the last two seasons, a title he has handed over to Son Ah-seop this year.

One of the KBO’s premier sluggers, Lee is a lifetime .312 hitter and sits four away from 300 career home runs as of 6 p.m. Tuesday.