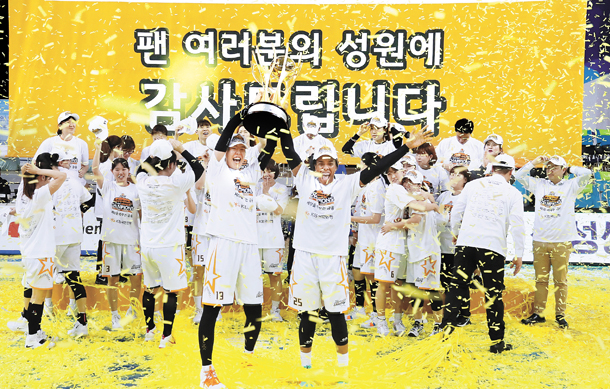 The Cheongju KB Stars celebrate their WKBL Championship victory with the trophy after defeating the Yongin Samsung Blueminx at Yongin Gymnasium in Yongin, Gyeonggi, on Monday. [YONHAP]

The KB Stars defeated the Yongin Samsung Blueminx 73-64 in their third game at Yongin Gymnasium in Yongin, Gyeonggi, to sweep the championship series. The WKBL championship series is played in a best-of-five format and the Stars didn’t lose a single game.

The Stars, established in 1963, won the regular season title three times since the WKBL was established 1998, but always came up short of winning the championship, as they only had five runner-up finishes.

As the WKBL was dominated by the Asan Woori Bank Wibee in the last six seasons, the Stars’ dominance is quite an upset. Since the 2012-13 season, the Wibee has won both the regular season and the championship title for six straight years.

Behind the Stars’ victory, Park Ji-su was once again a crucial player on the team, scoring 25 points and picking up 12 rebounds per game in the playoffs. After the championship game, Park won all 83 votes to take the MVP award. By winning championship MVP, Park became the second player in the WKBL, since Jung Sun-min during the 2007-2008 season, to win the championship MVP in a unanimous decision.

In addition, as Park was named MVP at 20 years and three months old, she is the league’s youngest-ever player in the WKBL to win the award.

Park also won the MVP award in the regular season. Park’s achievement is even more impressive as this was only her third season on the WKBL.

Even before her professional career began, Park was a notable player on the Korean women’s national basketball team, which she helped win bronze at the 2015 FIBA Asia Cup. After an impressive amateur career, Park turned professional in 2016 with the Stars. She became the highest-paid rookie in WKBL history, signing at 60 million won ($52,900).

She proved to be worth the price, winning the WKBL Newcomer Award for the 2016-17 season. During the Stars’ regular season game against the Wibee in February 2017, Park became the first Korean player in the league’s history to score 30 points and pick up 20 rebounds in a single game.

Following her successful rookie season, Park’s contract jumped up to 200 million won in her second year. Then, in April 2018, Park spent four months in the Women’s National Basketball Association (WNBA), drafted as the 17th overall pick by the Minnesota Lynx. The Lynx released Park, but she was picked up by the Las Vegas Aces and successfully made the roster. By making her WNBA debut, Park became the first Korean player in 15 years to play in the U.S. league.

Although she was a dominant player in the WKBL, in the WNBA Park was really only average, finishing the season with an average of 2.8 points, 3.3 rebounds and 0.6 blocks in 13 minutes over 32 games. Due to Park’s disappointing statistics, she wasn’t very popular with the fans.

Park may not have seen much action in the WNBA, but her experience in the top league definitely helped her throughout the 2018-19 season. In 35 games during the regular season, Park scored 13.06 points and picked up 11.1 rebounds per game, leading the Stars to dominate the domestic league.