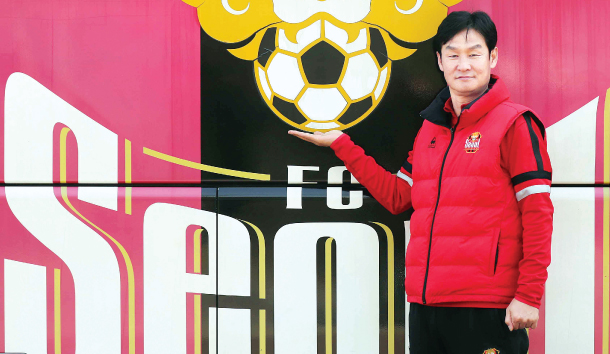 In Korea, football has always been more of an international sport. While the national team draws huge crowds, domestic clubs have always struggled in the shadow of the hugely popular baseball league.

But that’s all starting to change.

The national team’s popularity appears to have carried over to the K League, which began its 2019 season on March 1.

Of the clubs, FC Seoul is the most popular team. Last season, Seoul managed to top the league in ticket sales at 2.95 billion won ($2.59 million), but they weren’t too successful in terms of performance on the pitch. This season, head coach Choi Yong-soo is determined to bring Seoul back to the top of the league.

“Since we’re seeing a lot more fans visiting the stadium, we need to be more humble,” Choi said. “That’s how much responsibility I feel. I want more fans to be on the ground. We will repay them with more exciting football and passionate matches.”

Choi has been a major figure in Korean football for years, both as a player and a manager. During his career as a professional player, Choi played six seasons in the K League and played in the Japanese football league. His career as a manager started in 2011 when he became caretaker manager for FC Seoul. Starting in 2012, Choi was promoted to manager. He led the team to the K League title in 2012 and the FA Cup title in 2015. He also led Seoul to a runner-up finish at the Asian Football Confederation (AFC) Champions League in 2013.

Following his streak with Seoul, Choi moved to China, becoming manager of Jiangsu Suning in July 2016. His time there only lasted a year as he resigned in June 2017.

Then, in October last year, Choi once again returned to the Seoul FC to save the club from relegation. Last season, Seoul was far from a threatening team, finishing 11th out of the 12 teams in the K League.

Having barely saved the team from demotion, this season Choi is leading the team to a stronger start. In three matches, Seoul picked up two wins and one draw, totaling seven points, to be ranked second.

“We’ll try our best, thinking that we’re the challengers,” Choi said. “Our team is not in a situation to talk about victories. We’re just focusing on one game at a time.”

Although he may seem serious and hesitant, Choi has made it clear that, right now, Seoul is in the process of building up their team strategy.

“I’m trying not to pressure our players,” Choi said. “Our team just started a long journey. We’ll try to enjoy our journey.”

This season, Choi said he will stop himself from exaggerating his cheers when his players score. Until Choi left for the Chinese football league, he was known for his competitiveness. But once he returned from Jiangsu, that side of Choi was nowhere to be seen. Behind his new personality, Choi mentioned the time he took off after resigning from the Chinese club.

“My 16-month break was more valuable than the 35 years playing football,” Choi said. “Just how we call [China] a big continent, the Chinese stage was an enormous place where I couldn’t see the end. There were disappointments, but I got to widen my view.”

When Choi returned from China, he spent some time commentating, which also allowed him to see things differently.

“Once I returned, I started commentating outside the field,” Choi said. “Football looked different. I started to think that if I pushed for an aggressive style of play, it might break.”

During Choi’s off time, he was given offers from professional clubs in China and Japan but did not accept any of them as he always wanted to return to the K League. After months of doing nothing, Choi finally returned in October last year.

Seoul had to play at 100 percent until the very last match of the season to ensure they weren’t regulated.

“It was an experience that we shouldn’t repeat and want to remember,” Choi said. “We were always the team looking for a win. It was the first time where we played a match that could have possibly gotten us relegated from the top division. I could see how desperate I was at the bottom. That kind of experience allowed me to start the second half of my managing career.”

Having gone through one of the toughest seasons, Choi has gotten a lot smoother with his players and his new leadership allowed the team to train in a more positive atmosphere.

“Now, when the players seem tired, I get worried first,” Choi said. “I always try to be on the players’ side. When training, I see a lot more energy from the players.”

When players violate the club’s regulations, they’ve decided to fine them, collect that money and donate it at the end of the year. But so far this season, there has been no money in the pot, and Choi said he is worried that the club might not have anything to donate by the end of the year.

This year, Seoul has three key players - Park Chu-young, Ko Yo-han and Aleksandar Pesic. Although the trio may be the key players for Seoul, Choi made it clear that the whole team consists of starters this season.

“There probably wasn’t a manager that was as greedy as I was in the K League,” Choi said. “But I realized that’s not everything in the managing career. Right now, I’m just enjoying developing the team.”

Interestingly, Vietnam’s head coach Park Hang-seo was also a motivator for Choi. Park, who was the assistant manager of the Korean national football team in 2002, has seen success in Vietnam by leading the team to victory at the Suzuki Cup and to the semifinals at the 2018 Asian Games. When Park was a coach for the national team, Choi was a player on the Korean national football team.

“Unlike when he coached the [Korean] national team, I’ve seen different sides of him recently,” Choi said. “Including myself, a lot of the national team players from 2002 didn’t encourage [manager Park Hang-seo] leaving to Vietnam. But he made the decision and has done great things. More than anything, I could see how humble he was from his action and his words. A young manager like me should learn from that.”

FC Seoul will resume its season on Saturday against Sangju Sangmu at Seoul World Cup Stadium at 2 p.m.