Jung Ji-seok is probably due a pretty big pay rise

Jung Ji-seok is probably due a pretty big pay rise 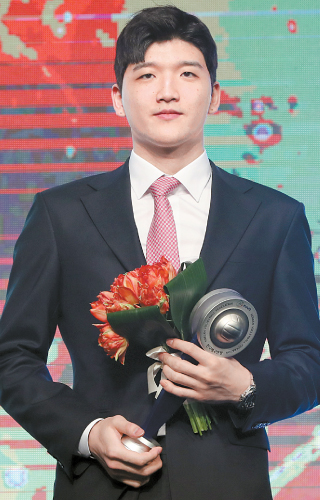 At age 24, Jung Ji-seok of the Incheon Korean Air Jumbos has just had the best season of his career.

Jung was named the Korea Volleyball Federation (KOVO) regular season MVP on Monday, becoming the second youngest player in the league to win the award. As this was his last season before becoming a free agent (FA), Jung’s MVP award will give him additional bargaining power in negotiations.

Normally, Korean men’s volleyball players get drafted while in college or after graduating. But Jung made a different choice. He became the first player in the KOVO to turn pro right after graduating high school.

Although he was just a high school graduate, Jung was drafted during the second round of the 2012-13 season draft by the Jumbos. As a young player, his height, jumping ability and speed attracted a lot of attention.

“If we work with him for the next two to three years, he’ll be our starting player,” said former Jumbos head coach Kim Jong-min. “I am not concerned at all.”

Just as Kim said, Jung made quick improvements. Although the Jumbos had a strong lineup, Jung quickly blended in as a starting player. Since 2016, Jung has regularly been called up to the national team.

“Ji-seok is outgoing but very serious on the court,” said Jumbos head coach Park Ki-won. “That makes him develop faster.”

Jung is also receiving the most attention in this year’s FA market.

But it’s not just now that Jung is receiving such attention from the clubs. Even before the start of the season, Jung was the focus during the preseason media day event in October.

Before the season started, Jung was already the most wanted player by the league’s head coaches. Now that it’s over, the question isn’t whether he’ll get a lot of offers, but whether he’ll break the KOVO contract record.

Currently, Han Sun-soo, also a Jumbos player, is the highest paid player in the KOVO, receiving 650 million won ($572,867) a year. Since the KOVO has a salary cap, it’s unlikely that Jung’s contract will be higher.

In KOVO, a player’s incentives are not affected by the salary cap. Due to this, although Han gets paid the highest in terms of income, with incentives, Jeon Kwang-in of the Cheonan Hyundai Capital Skywalkers is estimated to be the most expensive player.