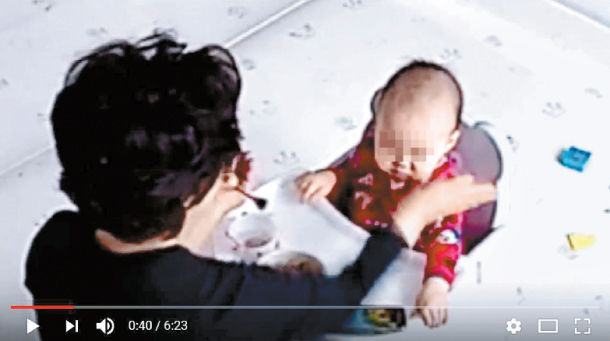 A nanny hired by a government-run babysitting program slaps a baby on the cheek for refusing to eat in a video uploaded by the child’s parents. [SCREEN CAPTURE]

A YouTube video uploaded on Monday showing a nanny employed by a government-run babysitting program slapping and pinching a 14-month-old baby has enraged parents across the country.

The parents of the toddler, who uploaded the video, also submitted a petition to the Blue House website the same day with a link of the video, urging the government to strengthen penalties for babysitters hired by the program, called the Idolbom Service. Idolbom - pronounced “ai-dol-bom” - roughly translates as “to look after a child.” The initiative is run by the Ministry of Gender Equality and Family, and, according to its website, sends nannies to homes to look after children between 3-months-old and 12-years-old whose parents are out working.

The parents of the baby attacked in the YouTube video introduced themselves in the Blue House petition as a working couple living in Geumcheon District, southern Seoul, who used the government program for about three months without receiving any financial subsidy because their combined income exceeded the accepted level, disqualifying them. The program, which assigns one nanny for each baby, normally costs 9,650 won ($8.50) per hour, but it offers discounts to households depending on their income levels.

The couple said they trusted the program because it was run by the government. They said they hadn’t known until recently that their baby was being “continuously” abused for a little over three months. The parents said they found out about the abuse after watching footage from CCTV cameras installed in their house. They didn’t explain in the video or in the Blue House petition what triggered them to review their CCTV recordings after three months, but in the YouTube video, the couple said they didn’t expect their nanny to be mistreating their baby because she was “so nice and kind” to them and appeared to adore their baby.

CCTV footage showed her slapping and pinching the baby while the parents were gone. As the baby started crying, the nanny shoved food inside the baby’s mouth.

In another part of the video, the baby was seen trying to crawl outside a crib and was wailing after several failed attempts. The next scene showed the nanny nonchalantly watching her smartphone in the living room. Through captions, the parents said the baby fell out of the crib and sustained a 4-centimeter-wide (1.6-inch) bruise and a centimeter-wide scar on the forehead. They said the nanny told the parents that the baby fell while she was in the bathroom.

According to the parents, the nanny apologized for the assault, but said it was all for the parents and the baby’s sake, adding that her six years of effort working in the babysitting program all went down the drain because she was fired.

“That really angered us, but what was really scary and terrifying was that someone who assaulted our baby this much had been working in the Idolbom [Service] for six years,” the parents said in the Blue House petition, which has garnered nearly 220,000 signatures as of Wednesday evening.

When asked for a comment on the issue, a spokesperson at the Gender Equality and Family Ministry said they watched the video and are reviewing the case.