The 2019 KBO season is already in its second week but the fans have yet to see some of the best players on the field. 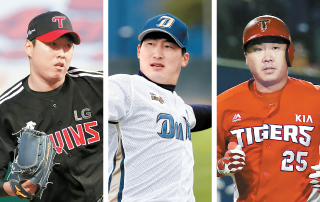 From left: Cha Woo-chan of the LG Twins, Na Sung-bum of the NC Dinos and Lee Bum-ho of the Kia Tigers. [YONHAP, ILGAN SPORTS]

Of the 10 clubs, the NC Dinos have the most players missing. During the Dinos’ exhibition game against the Lotte Giants on March 12, captain Na Sung-bum injured his side, forcing him to be excluded from the opening roster.

Na was expected to take at least three weeks to rehabilitate. As the Dinos were hoping to make their way back to the top of the KBO standing, the captain’s absence on the opening day was quite a disappointment. Although Na still hasn’t returned to the KBO, he is expected to make a comeback sometime this month, as he started training with the Dinos’ squad on Thursday.

While Na was slowly recovering from his injury, the Dinos lost another player — foreign batter Christian Bethancourt. During the Dinos’ game against the KT Wiz on Mar. 26, Bethancourt injured his right hamstring while running to first base in the 11th inning.

The absence of the Dinos’ starting players is disappointing for fans as this was supposed to be a big year for the Changwon team with the addition of catcher Yang Eui-ji. But Yang is still proving his worth with a .355 batting average as of Wednesday’s game.

The Doosan Bears are also missing a key player. Choi Joo-hwan injured his abdomen and was excluded from the starting entry. Yet Choi could be rejoining the Bears soon as he’s already training with the Futures League team.

Once Choi returns, the Bears are expected to have a fierce competition for a starting spot in the batting lineup.

The Kia Tigers still have a long way to go in terms of seeing its full roster. Since the spring training, the Tigers were off to a rough start due to the injuries of its starting players. Four players — Lee Bum-ho, pitchers Han Seung-hyuk, Kim Se-hyun and Yoon Suk-min — all had to return earlier than the expected spring training schedule due to injuries.

“I’ll call up Kim Se-hyun once he gets his pitches up to level,” said manager Kim Ki-tai.

While the teams are waiting for their starting players to return to the roster, the LG Twins are already seeing improvement in the team’s performance with the return of pitcher Cha Woo-chan.

Cha, who picked up the most wins among the Twins pitchers last year at 12, underwent elbow surgery in October last year and has been rehabilitating. Cha missed the opening game but was the fastest player to return from injury, coming back on Mar. 28.

Although he had a no-decision in his first game of the season, it was still a success for Cha, as he only gave up a hit and a run while striking out five in five innings to start his season with a 1.80 ERA.

On Wednesday, in Cha’s second game of the season, he finally picked up a win against the Hanwha Eagles by tossing five scoreless innings.

Along with Cha, the Twins are expected to boost their performance once again with the return of infielder Kim Min-sung. Kim is also expected to return to the Twins soon, as he is training in the second division.

“Since he’s done his individual training, I’ll make him train with the second division team for just a little longer before I call him up,” said Twins manager Ryu Joong-il.