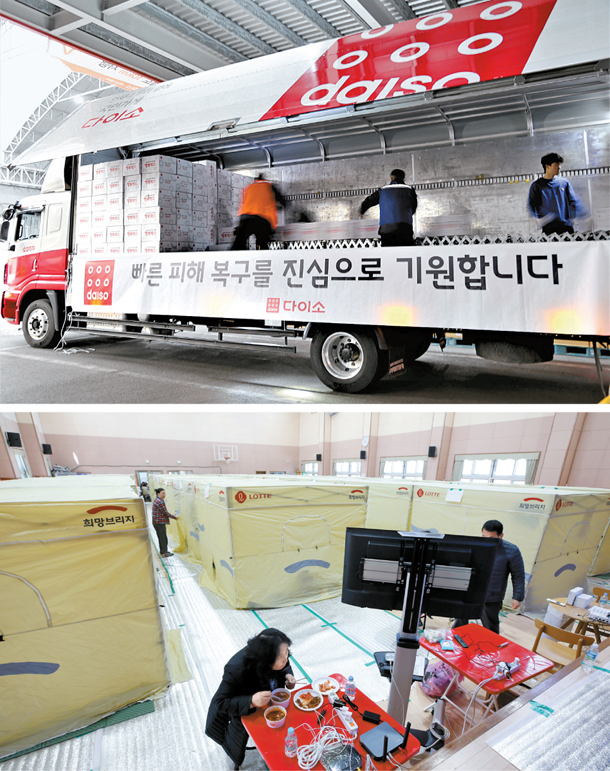 As the government worked over the weekend to accurately measure the damage caused by last week’s massive wildfire in Gangwon, local companies also announced support plans to help residents.

Conglomerates offered big amounts of cash. Hyundai Motor Group and Lotte Group announced on Sunday that they will each provide 1 billion won ($878,975) to support local residents who suffered damages because of the fire. On Friday, Samsung Group said it would donate 2 billion won for the cause while LG and SK Groups announced that they would each offer 1 billion won. Apart from cash, details of the support plans differed according to the companies’ business.

Retail companies donated what they do best: food and daily necessities. CJ Group, which has Korea’s largest food company CJ CheilJedang and multiple food franchises under its wing, offered snacks and 50 boxes of Hetbahn instant rice to firefighters and volunteer workers. The 1,000-won goods store Daiso made 1,000 boxes of detergents, gloves, plasters, tooth brush and wet wipes. They were sent to regional government offices of Goseong and Sokcho, Gangwon, which were most affected by the wildfire.

Booyoung Group, a conglomerate that focuses on construction, will rent around 224 of its apartments built across Gangwon for residents who lost their homes in the fire. The company said Sunday it started discussions with the Ministry of Land to decide the final number of apartments to provide.