Los Angeles Dodgers’ Korean pitcher Ryu Hyun-jin has had his third start of the season cut short by a left groin injury. 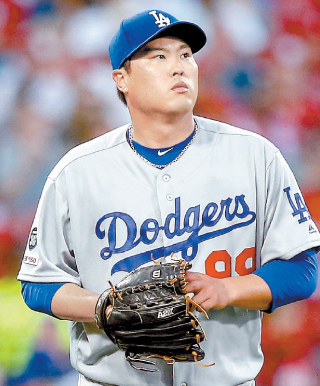 Ryu Hyun-jin of the Los Angeles Dodgers pauses during a game against the St. Louis Cardinals on Monday. [AP/YONHAP]

Ryu left the game with two outs in the bottom of the second inning against the St. Louis Cardinals at Busch Stadium in St. Louis on Monday. The game was tied at 2-2.

Ryu threw a changeup to the opposing pitcher Miles Mikolas for a strike, his 34th pitch of the game, and then stepped off the mound and called for the trainer.

After a few moments with the pitcher on the mound, manager Dave Roberts took the ball from Ryu. Though Ryu walked off the mound without a visible limp, the Dodgers said during the fifth inning that Ryu had suffered a left groin strain.

He also sustained a left groin injury that forced him to miss three months last year.

Ryu told the Los Angeles media afterward this injury wasn’t nearly as severe last year’s, when the muscle tore off the bone, and he only took himself out for precautionary reasons.

“I feel like there’s a big difference,” Ryu was quoted as saying by Orange County Register. “Last year, I knew from the get-go that it was a pretty severe injury. This year, it was more of a precautionary measure. I just wanted to be cautious. It just feels different and I know for a fact it’s not much of a concern compared to the one I had last year.”

The left-hander struggled with his command in this game, issuing his first walk of the season to Paul Goldschmidt in the first inning while serving up a two-run homer to Marcell Ozuna later in the same inning. Ryu missed the zone with the first pitch against seven of the nine hitters he faced.

He was charged with two earned runs on two hits and a walk in 1 2/3 innings. He struck out one batter, while his ERA rose to 3.07.

Before this season, Ryu repeatedly said his biggest goal for 2019 is to stay healthy from start to finish. He has made at least one trip to the injured list (IL) every season since 2014, his second year in the bigs.

Prior to his groin injury in 2018, Ryu dealt with hip, shoulder and elbow problems.

Roberts said Ryu’s latest injury will likely land the left-hander on the IL and said, “But for how long, that’s to be determined.”