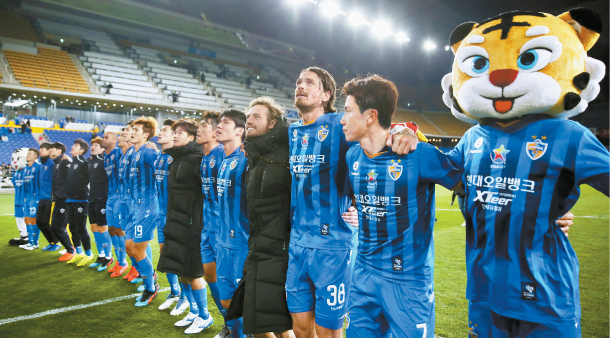 It’s been just a little more than a month since the 2019 K League 1 season kicked off and it’s already clear that the Ulsan Hyundai FC is pulling ahead of the competition.

In six K League 1 games, Ulsan hasn’t recorded a single loss, the only of the 12 teams to do so. Ulsan won four and drew two of its games, totaling 14 points to take a one point lead ahead of FC Seoul.

Their streak continues in the Asian Football Confederation (AFC) Champions League. Ulsan is assigned to Group F with China’s Shanghai East Asia, Japan’s Kawasaki Frontale and Australia’s Sydney FC. When the brackets were assigned, Group F was considered to be one of the toughest groups and Ulsan wasn’t expected to make it to the next stage.

Yet now that the teams have played their first two group matches, Ulsan is leading the group with a win and a draw, totaling four points. Ulsan had a scoreless draw against Sydney FC and defeated Shanghai East Asia 1-0.

Since Ulsan’s AFC playoff match against Malaysian football club Perak FA in February, which it won 5-1, the club hasn’t lost a single match for nine consecutive games with six wins and three draws. When it comes to the club’s record at home, it is even more dominant, having won all five games.

Most recently, Ulsan defeated Sangju Sangmu 1-0 in their K League 1 match on Saturday.

Today, Ulsan is hoping to continue its streak of success as it plays its third ACL Champions League group match against Kawasaki at home in Ulsan at 8 p.m. As Ulsan’s next Champions League match will be an away game at Kawasaki’s stadium, a win is crucial for the team to take the lead on aggregate.

Since Ulsan is currently undefeated at Ulsan Football Stadium, the fans have high expectations that this one will be another win.

“Kawasaki is a J League Champion,” said Ulsan manager Kim Do-hoon during a pre-game conference on Tuesday. “I’m excited. It’s at home so we’ll try our best. We’ve added great players [to the roster] this season and built on our teamwork over the winter. We’re seeing good things from our players so we’ll play a good match.”

Yet Kawasaki is not a team to look down on as it has been the J League champion for the last two years. The team didn’t only excel in the J League - Kawasaki also won the Japanese Super Cup this year.

Kawasaki got off to a slow start at the ACL Champions League by losing 1-0 to Shanghai East Asia, but quickly redeemed itself by defeating Sydney 1-0.

For Kawasaki, Korea’s Jung Sung-ryong will be in charge of the net. Having joined Kawasaki from the Suwon Samsung Bluewings in 2016, Jung is now the club’s star goalkeeper.

Jung was selected in the J League’s best 11 last year and was assigned as starting goalkeeper in two ACL Champions League matches. Jung only gave up one goal in the two matches.

Against Kawasaki, Ulsan is likely to be led by Brazilian striker Junior Negrao. In Ulsan’s recent Champions’ League match against Shanghai, Junior scored the winning goal and is looking to score his second consecutive ACL goal.

Along with Junior, Ulsan’s Kim Bo-kyung and Kim Chang-soo are getting ready to score against Jung. Interestingly, the three players were members of the Korean national football team when they won a historic bronze medal at the 2012 London Olympics.

If Ulsan does manage to take the ACL title, it will be for the first time since 2012.

Along with Ulsan, fellow K League team Daegu FC will also play its third ACL Champions League match against the J League’s Sanfrecce Hiroshima tonight at Hiroshima Big Arch. Daegu has been assigned to Group F and is the leader as it is the only team in the group to have won both matches.

Following the ACL Champions League match, the two teams will get right back into the K League 1 action as they’ll play their league matches on Sunday. Ulsan will face Incheon at Incheon Football Stadium at 4 p.m., while Daegu will face Suwon at Suwon World Cup Stadium at 2 p.m.