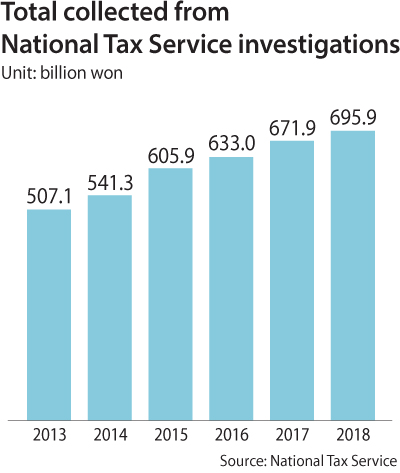 YouTubers are being investigated for the first time by the National Tax Service (NTS).

The service said that it is looking into possible evasion by 176 individuals, including YouTubers. YouTubers can make money from advertising on videos or sell products to viewers of their videos.

Among those being examined by the investigators are a so-called web cartoonist, a novelist, celebrities and professional athletes.

Although the tax authority has scrutinized the income of some YouTubers in the past, the current efforts are different, according to a spokesperson for the service. Before, it was basically auditing. Now, it is investigating.

“We are looking at five YouTubers in this investigation,” he said. “Their management agencies and related people are also included in the scope.”

YouTubers are in a tax blind spot due to the novelty of their businesses model and rapid changes in technology. Many of them operate alone, making it difficult to connect the dots.

“As the number of high income earners in the niche market increases and their earning activities complicate and diversify, their tax evading techniques are becoming more skilled and clever,” said Kim Myung-joon, director of investigation at NTS.

Although the tax agency did not disclose the names or the ages of YouTubers under investigation, the broadcasters are suspected of making billions of won in profit through advertising but failing to report their earnings to the tax agency.

They avoid taxes by not registering as businesses, thus making it difficult for the tax agency to track their earnings, especially since the payments are made by foreign companies. Foreign companies, like Google, are not required by the government to disclose how much they pay YouTubers.

Some of the YouTubers inflated their expenses to lower their tax payments, while other did not report the profits that they made on online shopping malls they have created using their YouTube fame. In certain cases, management agencies handling popular YouTubers directed income to accounts under borrowed names.

The NTS said it estimated the income of famous YouTubers based on their popularity and business activities. They also reviewed tax payment histories and requested evidence on income and spending.

The investigation includes the examination of 20 well-known figures in sports and entertainment.

Celebrities were found to have evaded taxes by reporting payments to employees as expenses and then later receiving the money back from them. According to the tax authority, the tax rate of the employees would be less than the rate of the celebrities.

Real estate or high-end imported vehicles were purchased with evaded taxes and they were given to family members. These transfers went unreported to avoid gift tax.

A “widely-known” professional athlete performing overseas did not report his or her income from outside Korea despite qualifying as a domestic resident, the NTS wrote.

The tax authority is examining a number of licensed professionals and real estate owners with suspicious taxation histories as well.

“If we discover deliberate attempts avoid taxes, we will treat them as infringement cases and report to the prosecution,” Kim wrote.

The tax authority has collected 1.3678 trillion won ($1.2 billion) in taxes by examining 1,789 people in the past two years. Ninety-one of those examined were penalized for intentionally evading taxes.

Although the authority reduced its number of investigations from 908 in 2017 to 881 last year, taxes collected increased to 695.9 billion won from 671.9 billion won a year earlier.

The results of the investigation are expected to be announced in three to six months, the spokesperson said.