Taekwondo practitioners from South and North Korea staged a joint performance here on Thursday to commemorate the 25th anniversary of the Korean traditional martial art becoming an Olympic sport. 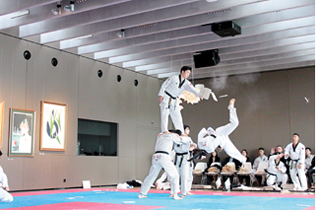 Taekwondo practitioners from the International Taekwondo Federation perform at the Olympic Museum in Lausanne, Switzerland, on April 11. [YONHAP]

The event, held under the theme of “One World, One Taekwondo,” was attended by more than 100 guests, including IOC President Thomas Bach and former German Chancellor Gerhard Schroder. WT President Choue Chung-won and ITF head Ri Yong-son were also present to see the joint performance by their Korean compatriots.

The taekwondo practitioners from the ITF performed first, showing crushing power breaks and its style of poomsae, or solo martial art patterns. The WT demonstration team then followed with their moves to the background music of Korean folk song “Arirang” and “Ave Maria,” emphasizing that taekwondo is an Olympic sport.

“We believe the power of sports can promote peace and facilitate positive changes in society,” WT President Choue said. “We’ve been watching what taekwondo can do.”

Bach congratulated taekwondo on its 25th anniversary and praised the two bodies’ collaboration.

This was the second of their three joint performances scheduled in Europe. The two sides’ joint taekwondo demonstrations began on April 5 in Vienna, the home of the ITF headquarters. They will wrap up their European tour after performing at the United Nations Office in Geneva on Friday.

The joint performances were organized to celebrate the 25th anniversary of the sport’s inclusion in the Olympic program at the IOC Congress in Paris in 1994. Taekwondo was then officially contested at the Summer Olympics in 2000.

The April events are the latest sport diplomacy between the two sides that started from the signing of a Protocol of Accord during the 2014 Youth Olympic Games.

Since then, the two sides have performed together on multiple occasions, including the PyeongChang Winter Olympics Games in South Korea, February 2018, and at an event in Pyongyang in October 2018.

WT and ITF last year agreed to form a joint organization to integrate taekwondo, and the latest exchanges are to facilitate their plan.

Currently, WT is the official international taekwondo governing body as recognized by the IOC. ITF has a different set of rules than WT.