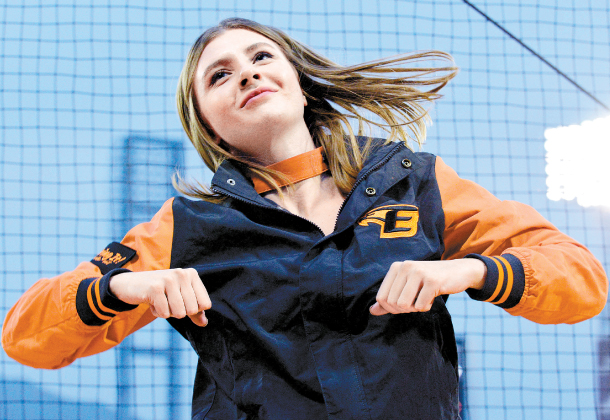 Doris Roland made her debut on March 29 as the only foreign cheerleader for the Hanwha Eagles of the Korea Baseball Organization.

Baseball fans were surprised to see a French cheerleader for a Korean baseball team.

Roland, 24, studied art and archeology at the Paris-Sorbonne University and fashion design at the Mod’art International Paris in France. When she was in high school, she often followed her father, who was a businessman, when he would visit Korea. Her affection for Korea led her to enroll as an exchange student at Pusan National University’s department of Korean language and literature. She continued to live in Korea after she graduated and worked as a model.

For the past two months, Roland went through intense training to become a cheerleader.

“It was so hard for me,” said Roland. “This is especially because I was not a dancer.

“My knee was in pain after practice. It was especially hard when I had to train before my knee completely healed. Even so, thanks to my team members, I could keep going on. They are the coolest friends,” she added.

The Eagles have ten cheerleaders, including Roland. “Even though it is hard for [Roland] as she is not used to dancing, she is doing great,” said Kim Yeon-jung, the leader of the cheerleading team. “Roland is very responsible.”

Below are edited excerpts of an English interview between the JoongAng Ilbo and Roland.

Q. How was your first day as a Hanwha Eagles cheerleader?

A. I could feel the intense heat of Eagles’ fans. Even before I was dancing for the team, they wrote supportive comments to me through social media. I was grateful, and since we are all supporting the Eagles, I replied to each of their comments in English. I made a few mistakes as I am a novice at cheerleading, but the fans nonetheless welcomed me passionately. It was an incredible experience.

How did you become a cheerleader?

I was offered the job through an acquaintance in January. At that time, I actually landed a job at a fashion company in Seoul, but I refused the offer to become a cheerleader. I thought that being a cheerleader was a once-in-a-lifetime experience. People talk about the American dream, and to me, this job is the Korean dream. I am glad that I can show people who I am and introduce what kind of country France is.

You weren’t familiar with baseball, right?

Yes. I am from the west coast of France so I was into surfing when I was in school. The most popular sport in France is football. There are a lot of enthusiastic fans in Saint-Germain, western Paris. I felt a similar spirit as I was cheering for the Hanwha Eagles. On the other hand, we don’t have cheerleaders in France, so the experience was new for me.

Are you still into fashion?

My grandmother and my mother worked in fashion. That’s why I have a dream in fashion, it is in my origins. Unexpectedly, I am doing something else. In France, it is not uncommon for a person to work on two things at once. Work and hobbies can go side by side, and can also be interchanged. Right now, I am a cheerleader and fashion is just a hobby.

What do you expect for your future?

Now, I am supporting the Hanwha Eagles as a cheerleader. I want people to see how I, a French woman, work as a cheerleader and live in Korea. If this gives someone confidence and influences them in a positive way, I would be happy. [Because I am still experiencing a lot of change,] I don’t know what I would be doing in the next few years, but I can certainly say that I am trying my best to do something meaningful.