Galaxy Fold weighs in light, but is a bit thick

Galaxy Fold weighs in light, but is a bit thick

Samsung Electronics on Tuesday released the full specifications for its Galaxy Fold, with initial deliveries scheduled for later this month.

The phone is slightly thicker on the hinge side due to a gap created by the gentle fold in the screen material, much like when a piece of paper is folded without a sharp crease.

It is lighter but thicker than Huawei’s Mate X foldable. The Mate X weighs 295 grams and is 11 millimeters thick when folded. 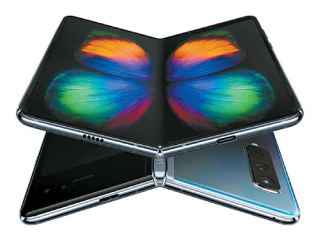 Although the Korean electronics company allowed a view from a distance earlier this month, it did not reveal detailed specifications at that time. The product was displayed in a glass case during MWC Barcelona in late February.

The Galaxy Fold has a 7.3-inch display, which can be folded into a phone with a 4.6-inch screen. The larger screen is designed for watching videos, playing games and multitasking.

The foldable screen is built with a polymer layer that allows for a flexible but tough display. The material is about half the thickness of that used in typical smartphone displays.

The company is accepting orders for the device in Europe from April 26, with the official release date on the continent set for May 3.

A 5G version of the Galaxy Fold will be released in Korea mid-May.

Samsung said earlier it aims to sell more than one million foldable smartphones in the global market this year.