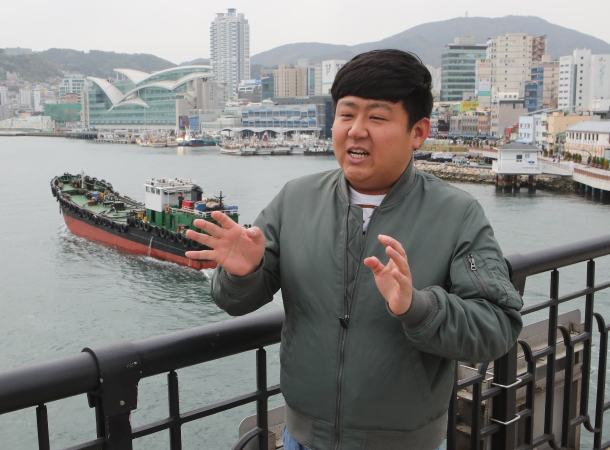 A young man burst into tears in front of the president at an event where a number of civil organizations were present at the Blue House on April 1. As the head of the Youth Policy Net, he remarked that nothing is different despite the fact that the administration changed.

Many empathized with his sorrow but also some said that he was too emotional. The JoongAng Ilbo met with the person who cried, Eom Chang-hwan, 34, the head of the Youth Policy Net in Busan.

He argued that as a representative of the youth, he is not asking the government to solve the massive unemployment issue but to look at the problem from a different angle. He also argued that the younger generations have to face the fact that they are living in a completely different world compared to older generations.

Q. You must have been asked this question a lot. Why did you cry at the Blue House?

A. I was talking about the social barriers I have encountered working as an activist for the youth movement. While talking about it, I was reminded of the hardships and the colleagues who worked together, and it made me burst into tears. I was embarrassed as well. I usually do not cry that often.

It was after you said, “Nothing has changed.”

Some media outlets reported that I cried while talking that nothing has been changed in relation to youth unemployment. They even added things I did not say, [such as that] my intention [was] to accuse the government of its inability to solve unemployment. One of the things that bother me is putting the problems concerning youth in a framework.

Then what was your intention in saying that nothing has changed?

I meant that confining the problems regarding youth as an unemployment issue has not changed. Breaking from that kind of myopic approach, the government has to look at the youth problem in terms of making long-term policies for the youth to prepare for the future.

Is there really nothing different?

Several institutions were made and policies were discussed locally. Yet changes in reality are invisible. The government introduced a bill based on the petition of the youth at the 19th National Assembly, but the session was over so it got scrapped.
It was scrapped because it was just completely out of [people’s] interest. The first bill introduced at the 20th National Assembly was from Shin Bo-ra, a member of the Liberty Korea Party. The opposing parties all say that they need to pass the bill, but they simply have not.

Is making the law that crucial?

Currently, the only law that defines the youth is the Special Act on the Promotion of Youth Employment. According to the second clause of this law, the term “youth” means a person who desires to be employed and who is of the age specified by the presidential decree. This means the youth are those who want to get a job. The law has to break from this narrow view and redefine the youth.

What is important other than jobs?

There are several issues such as housing, debt, political participation and health. I do not think that just because the law is made, these kinds of problems will be solved right away. The only thing I’m hoping for is [for the government to look] at the problem from a different perspective.

Is the support fund for young job seekers truly effective? People criticize it as a pork-barrel policy.

There was a program that provided education about employment that the government designated in the past. What they taught falls behind with global trends. The support fund for young job hunters is allowing the young to receive job training and the government is supporting financially. What is important is how the government uses the budget.

Some argue that because of the current administration’s stance, large companies are reluctant to invest, which is why jobs for the young are not increasing.

I want to ask whether jobs increased as much as big companies gained. There is even a term called jobless growth. In that regard, I think policies to expand small and medium-sized companies and starting businesses is a necessary social experiment.

Some adults say that you should have been angry at the older generation and resist them since they were the ones who shifted the pension problem to the youth. They say you should not have been standing there crying.

Even the older generations could have not thought this would happen. They did not know that society would age and technological would change this quickly.

The older generations are not the perpetrators. When I meet public officials and politicians, they say that the youth problem is serious and they need to be solved. How could I possibly get angry and fight [them when they say this]?

Kim Yeon-myung, one of the chief secretaries, told you to keep in contact with the president. Three weeks have passed. Did he contact you?

I have not received any calls. It is unnecessary to meet me in private. What I said [to them] was to create organizations that take charge of youth policies within the government and make a space for discussion, not to meet me.

How did you start participating in the youth movement?

I majored in mechanical engineering at Dong-A University. We all went to a car factory together, and I realized that my major was used in making a device that efficiently controls the movement of workers. Since then, I have participated in volunteer activities, participated in politics and here I am.

Is there anything you really want to say?

The world the current younger generation lives in is very different from the world older generations lived in. Admitting that becomes the starting point of discussing the problems of the youth.

[After Eom cried in front of the president, Lee Byung-tae, dean of the College of Business at KAIST, posted an article reproaching him on Facebook. He said that shifting the responsibility for the problems of the youth to the government is wrong. He also added that a weak and emotional attitude does not represent the youth well and said that succeeding in this tough life is hard. Since then, people have criticized him for being too picky and others praised him for saying the right thing. JoongAng Ilbo interviewed Lee as well.]

He reminded me of the youth these days, who blame the government for making them live under a hell-like Korea and identifying themselves as victims.

Isn’t it true that the reality young people are facing is tough?

I do not mean it is not tough. I know it is difficult, but let’s look at the cause. To begin with, developing countries emerged as competitors. China, who stole our jobs, is having its labor force stolen from India and Vietnam. Technological change is also rapidly progressing. The decreasing population is one of the factors as well. While all of this is going on, the wrong policy of our government is reducing the economic opportunity of the financially marginalized — the young and the old. The youth representative should have not cried in front of the president but rather asked why these problems are not being fixed.

How could more jobs be created?

In the end, conglomerates make jobs. This is not confined to recruitment from a specific company, but considering the jobs in the related business, the growth of employment relies on a successful company. Objective facts should not be denied.

What should the young people do?

The youth need to face reality. Right now, the ratio of students going to university exceeds 70 percent. From the perspective of the job market, college graduates are the same as middle and high school graduates of a generation before. According to one’s talent and aptitude, students need to be equipped with an ability that can be recognized as valuable.

Then isn’t it right to change the educational system?

The youth go abroad to cooking school and baking school. Those who are not able to afford it cannot enter these schools. The government needs to first open the education market and allow a variety of educational institutions to be created.

Many say empathy and solace are needed for the youth.

We need to carefully examine whether young people are in a more difficult situation that past generations. Politicians use that kind of awareness to expand their power and provide support funds for job-seeking youth and increase short-term jobs. Is this really an alternative for the youth?