At 89, loving husband is oldest to pass careworker exam

At 89, loving husband is oldest to pass careworker exam 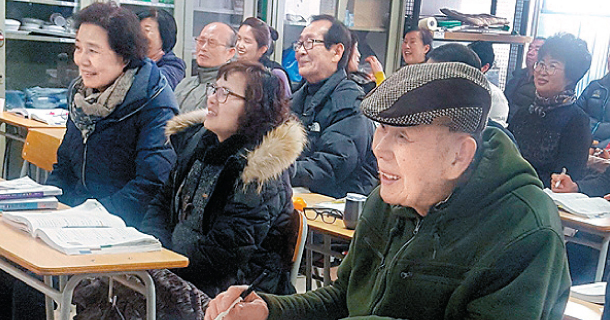 Choi Dae-sik, right, attends a lecture at the Yesan Nurses Academy in February. At 89, he became the oldest person to pass Korea’s careworker exam on April 19. [SOUTH CHUNGCHEONG PROVINCIAL GOVERNMENT]

Choi Dae-sik, 89, became the oldest person to pass Korea’s careworker exam on April 19, and he is now qualified to take care of his wife, who has dementia.

People who pass the careworker exam can care for those receiving long-term care benefits from the government. His wife, Kim Hyun-jung, 80, is a benefactor of the government support system.

“We have lived together for over 60 years,” said Choi. “I thought it would be better if I take care of her myself instead of through someone else.”

The JoongAng Ilbo interviewed him on Monday at Yesan Nurses Academy, where he was trained to become a careworker in Yesan County, South Chungcheong.

Kim started showing signs of dementia in July 2018. At the time, Kim became angry that one of her bankbooks went missing.

Choi said that he felt something was wrong because she took care of all of their bankbooks, so he took her to the hospital. It turned out that she was in the early stages of dementia. Following her diagnosis, Choi had been taking care of her by taking her to clinics and pharmacies.

After hearing about the careworker exam, he went to Yesan Heath Center’s Dementia Safety Center in Yesan to ask whether he could take the exam, and found out that the test has no age restrictions.

Choi registered at the Yesan Nurses Academy on Jan. 25 and took classes to learn about related theory and receive hands-on training.
In order to pass the exam, one must receive 60 points or more out of 100 on the written and practical exam. Choi passed the exam on his first try on March 30.

In addition to taking care of his wife himself, Choi will also be paid 500,000 won ($431) to 600,000 won by the government, as he is now a qualified careworker. If he wishes to take care of other patients, he will be compensated accordingly.

Choi and Kim first met through a friend and soon moved to Daejeon and Cheonan, South Chungcheong, and settled down in Yesan County 50 years ago. The apartment complex they are living in today has been their home for 19 years.

After the couple came to Yesan, Choi ran a watch shop and Kim ran a boutique.

After factories that supplied them with merchandise closed, they left their businesses and have been enjoying their retirement.
“I don’t know how much longer we will be able to live,” said Choi. “I want to take care of [my wife] until the day I die.”