Turning a movie theater into your living room

Turning a movie theater into your living room 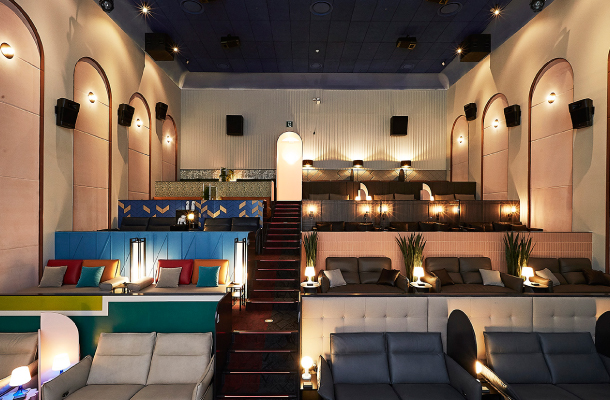 CGV’s Wangsimni branch introduces a new type of cinema called the “Cine & Living Room” to break the stereotype that movie theaters always have to be dark. [CGV]

Have you ever accidentally dipped your finger in cheese while trying to grab a chip in a dark movie theater? Or found yourself staring at the bright light emitting from someone else’s smartphone? Do you ever get the urge to look something up or make an important phone call in the middle of a film?

If you answered yes to any of these questions, then you are a typical moviegoer. You may not have found it particularly inconvenient, telling yourself that you simply have to get used to it to enjoy the film in a dark setting that lets you focus on the screen.

Yet what if someone told you that you’d be able to enjoy everything you love about a theater in a space as comfortable as your own living room?

Some may be dubious - theaters have been dark for as long as they have been around.

But Seong In-jae, the director of the CGV Cultureplex, wanted to take that assumption and turn it on its head by introducing “Cine & Living Room” to moviegoers at the theater chain’s Wangsimni branch in eastern Seoul on Wednesday.

This newly built theater is colorful and bright, and it remains so throughout the movie. “We keep tabs on our audience’s needs,” Seong said. “And interestingly enough, what they value most, above up-to-date technology [for screens and sounds], was being comfortable [in the cinema].”

Moreover, to keep in line with what younger audiences are looking for, the theater is very “Instagramable” according to Seong. From the entrance hallway, which has neon signs and attractive bright pink walls, theatergoers are free to take photos throughout the theater. Inside, 25 luxurious sofas await, featuring 10 different styles of “living room” for them to choose from.

Being bright and colorful does not mean that the theater’s screen and sound quality are neglected. Rather, CGV tried their best to break the rule that theatergoers can only concentrate in the dark by installing a state-of-the-art LED screen and sound system. Six speakers have been installed on the top of the room for a “sound shower” effect, as if the audience is surrounded by the sounds that “shower” on them.

This theater also provides 20 minutes of “culture time” before the start of the film, instead of the usual 10 minutes, for the audience to enjoy music and famous paintings that pop up on the screen. Moviegoers are free to roam around and take pictures as there are designated photo zones in the corners of the theater. There is a partition between each sofa and separate tables situated by the seats, giving off a private yet open space for each viewer.