Korea has suffered its first loss at the men’s hockey world championship in Kazakhstan. 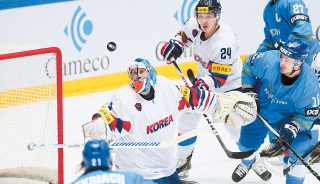 Korean men’s ice hockey team, in white, during a game against Kazakhstan at the IIHF World Championship Division I Group A tournament at Barys Arena in Nur-Sultan, Kazakhstan, on Thursday. [KOREA ICE HOCKEY ASSOCIATION]

Korea fell to host Kazakhstan 4-1 in its third game at the International Ice Hockey Federation (IIHF) World Championship Division I Group A tournament at Barys Arena in Nur-Sultan on Thursday.

Kazakhstan, world No. 18, scored twice in the opening period en route to a breezy win over 16th-ranked Korea.

This is the second-highest level of the IIHF world championships, and the top two nations after the round-robin play will be promoted to the elite division for 2020. The last team from Division I Group A will be relegated to Division I Group B for next year.

With two games remaining for each team, Belarus and Kazakhstan currently occupy the top two spots with nine points apiece, followed by Korea with six and Hungary with three. Korea earlier defeated Hungary and Slovenia to open the tournament. Its next match will be against Lithuania today at the same venue.

Coached by Jim Paek, a two-time Stanley Cup champion in his playing days, Korea made its debut in the top IIHF World Championship last year but was immediately relegated after losing all seven games by a combined score of 48-4.

Beating the first two opponents by a combined 10-4 fueled hopes of a return to the top-tier competition, Korea looked thoroughly disjointed against a dominant Kazakhstan team.

Pavel Akolzin opened the scoring for the home team at 3:57, when he tipped a point shot by Alexei Maklyukov and got it through goalie Matt Dalton’s five-hole.

Dalton, a Canadian native naturalized as a Korean, had to make some big saves to keep this a one-goal affair. But the netminder cracked again with 3:14 left in the first period, with the defense in front of him offering little support.

Kim Won-jun and Alex Plante got tangled up in the left circle in their own zone as they tried to clear the puck. Nikita Mikhailis got control of it and fed it to Leonid Metalnikov, whose quick one-timer from the point beat Dalton on the stick side.

Kazakhstan outshot Korea 13-2 in the opening frame and didn’t let up in the next period.

Kazakhstan went up 3-0 at 9:45 in the second period. Defenseman Darren Dietz made a nice breakout pass to Talgat Zhailauov charging down the left wing, and Zhailauov feathered a backhand pass that Dmitri Shevchenko redirected in for a three-goal advantage.

After failing to capitalize on consecutive power play opportunities late in the second and early in the third, Korea salvaged a goal at 10:13 in the third, as Shin Sang-woo deftly redirected a point shot by Kim Hyun-soo past Henrik Karlsson in net.

Korea tried to ratchet up the pressure, but Kazakhstan restored its three-goal lead about two minutes after Shin’s goal. Following a faceoff win, Mikhailis sent the puck to Nikita Kleshenko on the left point. The defenseman was left untouched as he cut in toward the slot and roofed a backhander over Dalton’s glove.