This season, the SK Wyverns’ underhanded pitcher Park Jong-hun may be the unluckiest pitcher in the KBO. 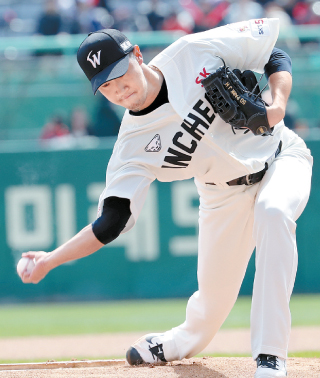 It’s been more than a month since the 2019 season began, and in this time Park has started in seven games but still hasn’t picked up a win. Instead, he’s picked up two losses with a 2.72 ERA in 39 and two-thirds of an inning. After a winless month in April, Park started the month May strong by playing well against the Kiwoom Heroes on Wednesday.

Park tossed seven scoreless innings, giving up four hits and while striking out four, but had to walk away with another no-decision game. The Wyverns won the game 2-0. The two runs were scored right after Park left the mound.

During the time Park was on the mound, the Wyverns’ batters couldn’t score a run against the Heroes’ starter Choi Won-tae.

Due to this, rather than Park, who tossed 95 pitches throughout seven innings, the Wyverns’ Kim Tae-hoon picked up a relief win after only tossing four pitches.

Park’s no-decision game was a little more disappointing than his other games of the season, as other pitchers from different teams picked up their first wins of the season that day.

The Samsung Lions’ Yun Sung-hwan and LG Twins’ Bae Jae-june picked up their first wins of the season, as well as the Hanwha Eagles’ Kim Beom-su.

Of the pitchers that started in five games or more so far this season, only Park and Kia Tigers’ rookie starter Kim Ki-hoon have yet to pick up a win.

Park’s games this season have been filled with bad luck. In his first game of the season on March 27 against the Twins, he threw for six scoreless innings but received a no decision. Then, against the Lotte Giants on April 2, Park gave up three runs in five and two-thirds of an inning and picked up a loss.

Before Wednesday’s game, Park tossed another seven innings against the Tigers on April 13, but once again, that was a no decision.

Park, who made his KBO debut with the Wyverns in 2011, picked up more than 10 wins in a single season in 2017 and has since continuously picked up double-digit wins each season. Last year, he picked up a career-best 14 wins.

Yet it wasn’t always smooth sailing. Park was added to the starting rotation in 2015, but despite high expectations, his ERA was stuck around 5.00 for his first two seasons on the mound, and in 2016 he walked more players than any other pitcher.

Park lacked control, and this problem continued to plague him even into the start of the 2017 season, when he was sent to the bullpen and the Futures League multiple times before finally cracking double-digit wins in August that year.

Although the number of wins is not the only determinant in evaluating starting pitchers, a win can be a good motivation to the starters.

“I am disappointed that we couldn’t get Park Jong-hoon a win, but his perfect pitching definitely allowed us to win the game,” said Wyverns manager Yeom Kyung-yup.

In addition to Yeom, Wyverns batters also expressed their disappointments for not being able to help Park pick up his first win of the season.

However, according to the Wyverns rotation, Park will have a shot at picking up his first win next week, as he is scheduled to start on Tuesday when the Wyverns play against the Hanwha Eagles at home.

“Honestly, I would be lying if I said I didn’t care [about not winning],” Park said. “But I would like to win in games that my team wins in. I’m going to continue pitching aggressively.”