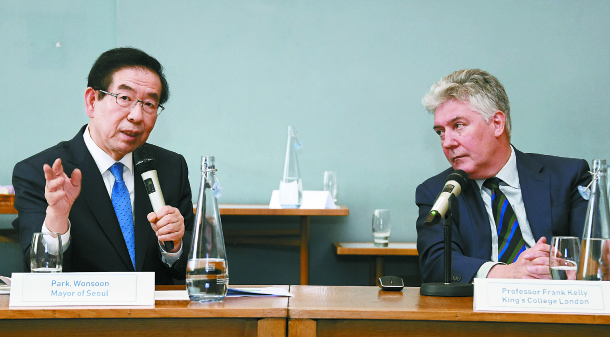 LONDON - When you’re trying to get from point A to point B and you use a navigation app, often it gives you more than one route option, based on highway tolls or congestion on the way.

But what if there was an application that gave users several options for routes based on the level of PM2.5 pollution estimated?

“Our latest tool is called City Air. It is a mapping tool like Google Map, so you input the origin and destination, and it will give you the quickest route,” said Frank Kelly, professor of environmental sciences and head of the analytical, environmental & forensic sciences department at King’s College London.

“But immediately it will give you a second route, and it may say that it will take 10 minutes longer, but it will reduce your exposure to air pollution by 15 percent,” Kelly said. “Then it will offer a third route that may take 20 minutes longer but reduce the pollution exposure by 50 percent. So the public has the information to make informed choices.”

Kelly was speaking to Seoul Mayor Park Won-soon and his delegation from the Seoul Metropolitan Government at King’s College London on Friday afternoon. The meeting was organized by the city government and the college.

London has rolled out measures to curb vehicle emissions for several years. It began with a congestion charging scheme in 2003, whereby a vehicle entering a certain zone must pay ￡11.50 ($15.10).

The measure was followed in 2008 by the designation of Low Emission Zones (LEZ) throughout the city, where heavily polluting vehicles are charged - including old diesel-fueled cars. If a driver enters an LEZ and pays the fee, they also have to pay congestion pricing if they enter a congestion pricing zone.

In April, London introduced an Ultra Low Emission Zone (ULEZ) in the center of the city. The area stretches roughly east to west from Hyde Park to Tower Bridge, and north and south from Regent’s Park to Elephant and Castle. Within the zone, stricter standards apply, with most vehicles paying ￡12.50.

The ULEZ is similar to what the city government of Seoul is hoping to implement from July 1. The Seoul Metropolitan Government designated a 6.5-square-mile space within the Fortress Wall of Seoul as a so-called green transportation space, complete with a congestion charge scheme, additional green spaces, such as forests and parks, and new pedestrian roads. The goal is to reduce emissions in the area by 40 percent by 2030.

Seoul will be running a pilot program from July to December before finalizing the details of the policy.

“I think there is much to learn from Kelly’s project,” said Mayor Park. “The team’s model is based on strictly scientific and objective research. In Seoul, our Seoul Institute research lab is also keeping big data on air quality, but I think it is in need of an upgrade to be able to pinpoint exactly where the fine dust particles are coming from.”

The air quality in Seoul has worsened over the years. It was especially bad in 2018, and the pollution continues. The daily average level of PM2.5 particles in Seoul hit 135 micrograms per cubic meter on March 5, the highest since 2015, when the data was first recorded. This is more than five times the World Health Organization’s (WHO) recommended exposure.

PM2.5 particles are less than 2.5 micrometers in diameter. The WHO describes them as carcinogenic. PM2.5 particles can travel through the respiratory tract and reach the bloodstream, possibly leading to lung cancer and other lung conditions as well as heart problems and strokes.

The following are edited excerpts of a conversation with Kelly about his work on developing the model to estimate air quality in various areas in London and how the city has been trying to get the public on board the government initiative for cleaner air. Kelly spoke with the delegation from Seoul and a group of reporters. The conversation is edited.

Q. How did London come to focus on curbing vehicle emissions in order to tackle air pollution, more so than other pollution sources?

A. In 1952, the primary cause of pollution was burning of coal. This changed with the 1956 Clean Air Act, which banned burning of coal within city limits. Even though we improved air quality, we, at the same time, were not reducing pollutants coming from road transport. According to the data from London Atmospheric Emissions Inventory in 2016, 64.9 percent of PM2.5 was from road transport.

So we know that taxis, diesel cars, diesel light vehicles and diesel buses produce much of the road transport emissions. If you are going to target air quality in London, these areas need to be addressed.

There have been protests in Europe against fuel taxes, like the yellow jacket protest in France. How has London addressed public discontent with traffic zone policies?

In London, we had series of demonstrations by mini cab drivers, because for the first time they had to pay to come into the city. We’ve had two or three organized blockades against the ULEZ, but nothing from the public. In fact, there is a survey that indicates that ULEZ has been very well accepted by the public, and the opposition is only about 10 percent. And that 10 percent is three groups - some low-paid workers, some mini cab drivers and some small businesses.

If that is the case, why and how has the public in London come to accept these policies?

In London, the public is very aware of the problems of the pollution. Ten years ago it wasn’t, five years ago it was beginning to, but everybody knows about it now because our newspapers have run the story all the time.

Our latest tool is called City Air. It is a mapping tool like Google Maps, so you input the origin and destination, and it will give you the quickest route. But immediately, it will give you a second route that will take 10 minutes longer but reduce your exposure to air pollution by 15 percent. Then it will offer a third route that will take 20 minutes longer but will reduce the pollution exposure by 50 percent. So the public has the information to make informed choices.

How is such precise measurement of air quality by an area possible?

The model itself takes in every vehicle in the city. We are lucky, for the wrong reasons, to have series of cameras in the city - so when a vehicle goes past a camera, the number plate goes into a national database that tells us information about emissions. Then we also have information about all the energy emissions from commercial and private buildings with gas, all the cooking emissions and airplane emissions - everything is in the model for London. And with 120 monitoring stations, we are able to calibrate the model as well. This is how we provide the air quality information in 20-by-20 meter (66-by-66 foot) resolution.

The Seoul city government is also trying to adopt a ULEZ-like policy. Do you think the policy can be applied to other cities?

I don’t know enough about the challenges in Seoul. We have a lot of diesel pollution here, and the ULEZ is aimed at removing diesel. In Seoul, I don’t think you have as much diesel. So the rules would have to be different. And it may be ultimately you will need to reduce vehicle numbers. Because I’ve been to Seoul, and there are lots of new vehicles on the road. So I think it’s the number of vehicles for you. Minimize the traffic jams and spread the vehicle movements, because if you pay more during congestion time, you will change your lifestyle.

In the case of Korea, research indicates that about half of the air pollution in the country is caused by pollutants from beyond its borders. How can a city government best cope with air pollution from outside forces?

Firstly, pollution has no boundaries. We all emit pollutants, and we all suffer from other people’s pollutants. You must enter discussions with your neighbors about the influence that their pollution is having.

And you need some evidence which is convincing which demonstrates where the pollution is coming from. In London, we have three “super sites” - these do not just measure PM or NO2 (nitrogen dioxide), they measure what the PM is made of, so when the PM increases, we know what direction it’s coming from, we know if it’s coming from coal burning, oil burning, forest fires or industry, and we can trace it to the origin.

When London has a high pollution day, it is not because London is producing all the pollution - one is weather phenomenon, not letting pollution escape the city, and another factor is pollution coming from a different continent. So we have monitors in the east, south and west, so we know where the pollutants are coming from.