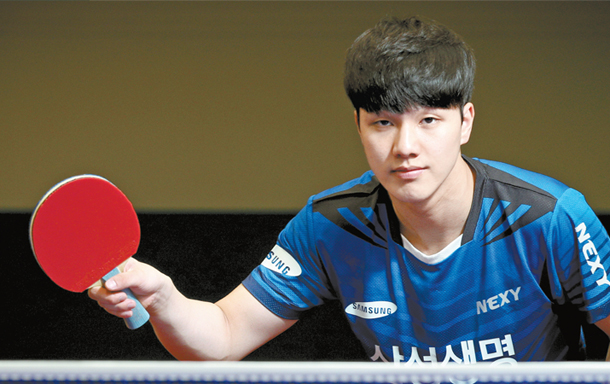 An Jae-hyun poses for a photo with a table tennis racket at Samsung Training Center in Yongin, Gyeonggi, on Monday. [LIM HYUN-DONG]

He returned a hero.

At age 19, An had only just earned a spot on the senior Korean national table tennis team and headed to the world championship ranked 157th in the world. Although realistically he didn’t stand a chance of medaling, the experience on the international stage was bound to do him good.

What nobody expected was for An to storm through the competition in Budapest, winning bronze in the men’s singles on April 29 to become Korea’s sixth men’s singles winner and the youngest medalist in Korean table tennis history.

He also more than halved his world ranking, flying down the list from 157th to 73rd.

“I’ve never received this many messages while I played table tennis,” An said. “I didn’t really know that the world championship is this big of a deal.”

“Before the opening day of the tournament, I told my teammates that my goal was to advance to the quarterfinals. In response, a lot of them were like, ‘Wouldn’t that be really difficult?’ or ‘Isn’t that too big of a goal?’ Since I competed without knowing much about it, I wasn’t that nervous. I think that allowed me to get good results.”

Since the moment An was added to the Korean national team, his success at the world championship has played out like a blockbuster movie. An didn’t even earn his spot on the national team until the last minute, in March.

The ITTF referred to An’s victory over Wong as “arguably the biggest shock of the day in singles competitions.”

Following the win, An continued his streak. In the round of 16, An defeated fourth ranked Tomokazu Harimoto of Japan 4-2 and in the quarterfinals, he defeated his teammate Jang Woo-jin, who is ranked ninth, 4-3.

Yet An’s streak came to an end in the semifinals as he lost 3-4 to 11th ranked Mattias Falck of Sweden 3-4.

“After I become a semi-pro for the first time last year, there were a number of matches that I just gave up on,” An said. “A lot of the people told me how I had a very weak mental game. So I told myself not to give up easily this time.”

“Since I’ve won against Harimoto quite a number of times when we played in junior tournaments, I had confidence. I wanted to play against him to see how much [we’ve] improved.”

He started to make improvements after attending Dongsan Middle School and Dongsan High School in Daejeon, famous for their table tennis programs. An’s always been a hard worker - friends remember a time when he would practice from 6 a.m. to 11 p.m. As a result, An finally won gold in the men’s doubles at the 2016 World Junior Championship, teaming up with Cho Seung-min.

As he’s only just started his table tennis career on the senior stage, An is not yet satisfied with his recent achievements. He believes that he is now just at the starting point.

“I’m not sure if I’ll ever get this chance again the next time I get to compete at the world championship,” An said. “If I do get to compete again, I think it’ll be the same in terms of playing confidently and not getting nervous. It’ll be very important from now on. Just because I played well this time doesn’t mean that I’ll play well every time. My world ranking is still in the mid-70s, so I need to work a lot harder.”

Keeping up his performance is always important but for An, his next goal is to compete at the Tokyo Olympics.

“If I slowly make improvements, one step at a time, I might get a chance at the Tokyo Olympics. A lot of people would say it’s a reckless challenge but I’ll be working toward the goal of winning gold.”