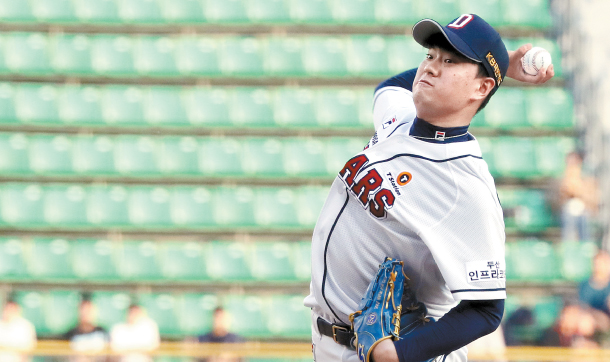 Lee Young-ha of the Doosan Bears throws a pitch during a game against the Samsung Lions at Jamsil Baseball Stadium in southern Seoul on Tuesday. [YONHAP]

When Doosan Bears’ pitcher Lee Young-ha made his KBO debut in 2017 he served mostly as a swingman, pitching in the bullpen and jumping into the starting rotation when needed.

Yet since July 27 of last year, Lee has become a fully-fledged member of the starting rotation. This season, Lee is once again in the rotation and is off to a solid start, having picked up five wins with no losses and a 1.88 ERA in eight games.

Lee started this season as the fifth starter in the Bears’ rotation but, looking at his ERA, he is good enough to be second. As of Wednesday 6 p.m., Lee is ranked fourth in the league’s ERA. Among domestic pitchers, Lee has the lowest ERA in the league and the second lowest in the Bears, behind Josh Lindblom.

This season, Lee has improved his control, lowering the opposition batting average from .324 to .193.

Q. How are you so consistent this season?

A. I think pitching aggressively has been leading me to good results. I’ve reduced the number of pitches [in a game]. Since I thought that my strength was in my fastball and speed, I’ve been aggressive and this is making it harder for the batters to hit the pitches. As I’ve gained confidence, my pitches are also showing great results.

The opposition batting average against your slider has dropped significantly. What kind of changes did you make?

It’s closer to a [cut fastball] than a slider. I learned a cut because the speed of my slider was too slow compared to my fastball. So far, I think that is very effective. I’ve been controlling the speed so it’s a slider when it’s slow or a cut when it’s fast.

I feel like when I can toss it at a speed of around 141 kilometers per hour [88 miles per hour], I don’t think they can really hit it. Since they’ve been effective, I get to toss that pitch a lot. Sliders are at about 129 kilometers per hour and cuts at about 140 kilometers. When I throw a cut at a slower speed, it produces a bigger angle curve, so they classify that as a slider.

It’s not that easy to make this much improvement in your breaking ball within a year. How much work have you done?

I’ve been thinking about it a lot. Even on days when I’m not pitching, I have a baseball in my hand to get used to the grip. I can only know if it’s good or bad after actually pitching on the mound. Toward the end of last year, I just pitched thinking “whatever” and that helped. That worked and it was useful. Since I was getting better toward the end of the season, I gained confidence.

Your curves are nothing like last year’s. What changed?

I don’t [pitch] a lot [of curves]. There’s about two to three a game. Although it’s not perfect, when I show them, batters start thinking [about curves when they face me in the batter’s box]. So it’s easy to get the [out] count and it’s not that difficult.

What have you focused on during spring training?

I thought the speed of my fastball was OK, so I focused on the details. I paid more attention to location, control and my breaking ball. I’ve practiced a lot and now my breaking balls are hitting the targets that I was thinking about. I think I’m continuing my stride because I’m in great condition. I think figuring out how to get through this when I’m not in a great condition will be a problem.

Manager Kim Tae-hyung evaluated that you have a great fastball and your breaking balls are threatening. Do you agree with him?

It is true that if I have good fastballs, breaking balls work out well. Sliders and cuts have gotten a lot better, and our catchers have been telling me the same things. I gain confidence from it. Although I don’t have a lot of strikeouts, being aggressive against batters allows me to lower the number of pitches.

Do you feel a little more stable now that you have a set position as starter?

Rather than [feeling more comfortable because] I no longer have to worry about my position, I feel better psychologically because they keep on trusting me. We have a long season, but starters get to play in about 30 games or less. It’s really important to take care of our physical conditions while we’re not playing but now, I have more time to do it.

Do you prefer to be a starter than a bullpen pitcher?

When I was little, my dream was to be a closer. I still have that, but I like this spot too. If I can secure my spot as a starter, I can play for one team for years. But for closers, you can get demoted down to a set-up man any time, unless you pitch like Oh Seung-hwan [now of the Colorado Rockies]. Being a starting pitcher is definitely better being than in the bullpen.

Among the bullpen pitchers, a lot of them want to be a starter. But why do you prefer to be a closer more than a starter?

To me, closers look cool. I like to be powerful so I like to fight and win against the batters. That’s what most of the closers are like.

Starters tend to manage the game more. But as I play as a starter, I’m actually learning a lot.

What would be your goal for the remaining season?

I say this all the time but the first thing is to fulfill the regulated innings [144 innings]. Once I do that, I want to pitch in more innings. To do that, I have to play without skipping out of the rotation. Also, I shouldn’t have any injuries. It’s all part of my goal of fulfilling the innings. Once I can fulfill the innings, I want quality starts [giving up three runs or less in six innings]. Once I get quality starts, I will assume that my win and ERA stats will follow.

So every time I get on the mound, I tell myself “just get a quality start.” If I pitch like I’ve been pitching lately, I wouldn’t ask for more. I’m sure I’ll get tired [as the season goes] so I have a lot of thoughts as to how I’m going to get over that.