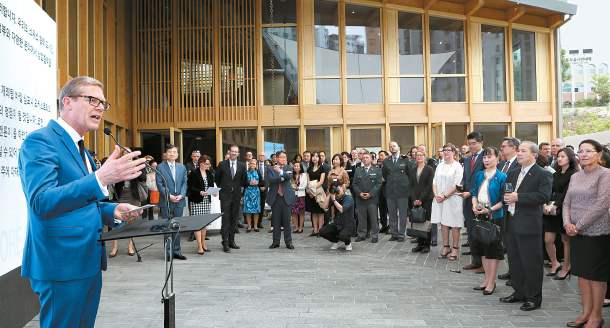 Ambassador of Switzerland to Korea Linus von Castelmur addresses members of the diplomatic corps, artists, musicians, architects and members of the Swiss Federal Department of Foreign Affairs (FDFA) and Seoul city government at the opening ceremony of the Swiss House, the new Swiss Embassy in central Seoul designed by Burckhardt+Partner SA, on Friday. Conradin Cramer, the state councillor of the Canton of Basel-Stadt, and Pascale Baeriswyl, state secretary of the Federal Department of Foreign Affairs, joined the ceremony for the new embassy. The embassy, which was inspired by hanok (traditional Korean houses), retains certain Swiss elements to give visitors a feeling of walking in a wooden house near the Alps, according to Helene Binet, a Swiss photographer. [PARK SANG-MOON]