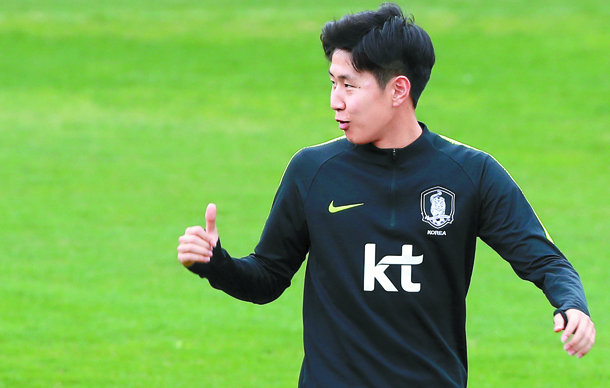 Lee Kang-in trains with the U-20 Korean national football team at the National Football Center in Paju, Gyeonggi, on April 23. [YONHAP]

The Korean U-20 football team will start its campaign at the biennial FIFA U-20 World Cup Saturday.

With the addition of Valencia CF’s Lee Kang-in, Korea hopes to repeat their success from the 1983 World Cup in Mexico. Prior to the tournament, Lee’s addition to the U-20 team received a lot of attention from Korean football fans, but his appearance at the tournament is now making waves globally.

On Monday, the FIFA U-20 World Cup released a list of “Ten players poised to star at Poland 2019.” Lee was included in the list.

“Valencia swooped in for Lee early, as the Incheon-born attacking midfielder joined the Spanish side’s youth set-up in 2011,” explained the FIFA article. “His maturation at the club culminated with his senior debut in January 2019. For country, Lee received his first senior call-up in March 2019.”

Lee made his first public appearance in season three of the KBS TV program “Shooting Kid” in 2007. The gifted youngster was only seven at the time and was labeled a football prodigy. Hailing from the port city of Incheon, Lee entered the youth academy at Incheon United before moving to Spain in 2011 with his family where he was accepted into Valencia’s youth academy.

Lee has been moving up the ranks at Valencia very quickly. In July 2017, he was promoted to the Juvenile A team and then in January this year, he was offered a professional contract and promoted to the Valencia B team.

During the 2017-18 season, the 18-year-old attacking-midfielder played 11 matches in Spain’s Segunda Division B league and scored one goal. But that was only the beginning. Prior to the beginning of this season, the club announced the renewal of their contract with Lee.

After completing Valencia first team preseason training camp, Lee was promptly called up to the top team and made his debut for the club on July 25, during a preseason friendly against Swiss side FC Lausanne-Sport.

Then, in August, during another preseason match against Bayer 04 Leverkusen, a German football club, Lee scored his first goal.

Although Lee spent most of the season as a bench warmer, he was still good enough to get called up to the senior national football team in March. However, Lee didn’t get to play in any of Korea’s friendly matches.

Throughout the tournament, Lee is expected to be a key player for the U-20 team. It could be a career-changing opportunity for Lee, as his performance may open the door to transfer opportunities.

As Korea’s U-20 players are not as experienced as Lee, his addition has also bolstered the team.

“When I pass the ball to Kang-in, he does everything for us,” said midfielder Jeong Ho-jin. “So it’s easier to play. He can easily get past one to two defenders and quickly open up more space.”

Just as his teammates say, Lee is already living up to the high expectations. During Korea’s friendly match against Ecuador in Poland on Saturday, he scored a goal to lead Korea to a 1-0 victory.

“Kang-in regularly makes comments to the teammates, but we don’t hate it,” said Hwang Tae-hyun, midfielder and a captain. “He says it like a joke, but he has a point. I think he’s different because he’s more used to playing on a bigger stage.”

Led by head coach Chung Jung-yong, the squad will be competing under the slogan of “AGAIN 1983.” The U-20 team’s best finish at the tournament was advancing to the semifinals during the 1983 FIFA U-20 World Cup in Mexico. In the 2017 U-20 FIFA World Cup, which was hosted in Korea, the squad faced early elimination by losing to Portugal in the round of 16.

To repeat the 1983 success, Korea has to survive the group stage. At this year’s World Cup, Korea is assigned in Group F with Portugal, Argentina and South Africa. Group F is considered a tough group as Portugal and Argentina are strong favorites to win the tournament.

“Our first task is to get through the group stage,” Chung said. “[Looking at the bracket,] I think the knockout stage might be a little better.”

Within Group F, the teams have outstanding players. Portugal will be led by Rafael Leao, who scored eight goals in 26 matches for French team Lille OSC. Argentina, who has won the most titles at six, will be led by Nehuen Perez.