Two of Korea’s four Europe-based players are hoping their overseas experience will have a positive impact on the team at the upcoming FIFA U-20 World Cup. 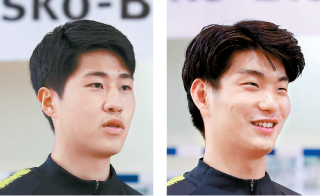 These European leaguers, along with Valencia CF midfielder Lee Kang-in and Hamburger SV goalkeeper Choi Min-soo, will be counted on for leadership on and off the pitch.

Kim Hyun-woo will be the center back in Chung’s back-three scheme, the player responsible for steadying the defensive ship. Kim Jung-min, as the central midfielder, will be the link between offense and defense.

Both players missed the national team’s final home training camp late last month and joined the rest of the national team behind schedule, due to their club commitments. Kim Hyun-woo met his teammates on May 5, and Kim Jung-min arrived six days later.

Kim Hyun-woo, who’s on loan to Dinamo Zagreb from Korean club Ulsan Hyundai FC, said he was surprised with how well the rest of the team had been prepared, and he wanted to put in extra effort so as not to mess with the setup.

“The things that I’ve learned while playing in Europe should help me a great deal at this World Cup,” the 20-year-old said Thursday. “These matches won’t be easy, but I don’t think we have to be intimidated.”

Kim Jung-min, who signed with FC Red Bull Salzburg last year before getting loaned to his current club, said he will go into the tournament with plenty of confidence.

“Over the past year, I’ve learned a lot by going up against older players in Europe,” said Kim, 19. “There’s so much more that I want to show at this tournament. I feel like I can do really well.”

Kim just missed the cut for the previous U-20 World Cup hosted by Korea two years ago, which makes the teenager appreciate this opportunity that much more.

“I am grateful to be in Poland with my friends for the World Cup,” he said. “I’ll go out there and play with confidence and urgency.”