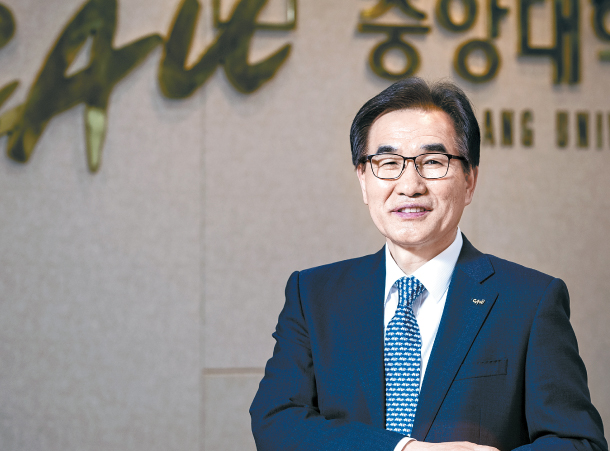 Kim Chang-soo, 61, the president of Chung-Ang University, poses in front of the camera at the university’s main campus in Dongjak District in southern Seoul. [PARK JONG-KEUN]

Kim Chang-soo, 61, the president of Chung-Ang University (CAU) plans to focus on three Cs — connect, converge and contribute — to foster talented individuals that are reminiscent of Leonardo da Vinci.

Kim emphasizes that versatility in many subjects — such as science, philosophy, the arts and politics — is essential for becoming successful in the future. Kim said now is the time to think about how to solve problems universities face, such as adjusting to the fourth industrial revolution, the decreasing enrollment of freshmen and financial difficulties.

Kim pointed out that universities are too obsessed with publishing their research instead of focusing on the research itself.
“We need to change how we evaluate universities so that we can vitalize inductive methods of research,” said Kim.

CAU has created a Future Convergence Center to move toward becoming a research-based university. It fosters seed groups that focus on solving social problems or revolutionizing inter-disciplinary research. The center embodies the idea of a consumer-based “University 4.0.” Last year, 19 groups applied to the center.

CAU celebrated its 100th anniversary in 2018. Kim said now is the perfect time to change the paradigm within the university’s education system from a facility for teaching and learning to a place where creative talents can be cultivated through thinking.

Kim was born in Hwaseong, Gyeonggi, in 1958. He studied accounting at CAU and graduated in 1984. He received his master’s degree in the same subject from Florida International University (FIU) in 1988 and studied business administration at FIU, receiving his doctoral degree in 1993. He returned to CAU to become a professor of business administration in 1994. He became president of CAU in 2016.
The JoongAng Sunday sat down with Kim at CAU’s main campus in southern Seoul, on May 8.

Q. I heard that CAU created a new motto after its 100th birthday.

A. Our new motto is “Chung-Ang, creative individuals who contribute to humanity.” We plan to make CAU into a university that leads by creating knowledge, supporting the success of students and becoming a global university that connects the world by 2030. Our three strategies are to connect, converge and contribute.

The three Cs strategy is interesting.

In the fourth industrial revolution, the three Cs are essential. It connects various subjects and creates knowledge through fusing those subjects, thus contributing to society. This is the New Promise [that CAU promises to society] by fostering [Leonardo] “da Vinci”-like talents so that students can succeed and contribute to humanity.

Leonardo da Vinci is a symbol of creativity and multiple potentials, which are essential traits of the fourth industrial revolution. I chose the word “Da Vinci” to create an impact. In Alvin Toffler’s “Revolutionary Wealth,” Toffler said wealth came from a period of growing, making and thinking, [which refers to agriculture, industry and information]. The leaders of the new century will come from thinking people like Leonardo da Vinci.

Is recruiting some of your freshmen without majors an attempt to find talent?

There are some students who struggle because they don’t realize their aptitude and potential when they enter school. We allowed them time to explore majors for a year, and had great results. This program [of recruiting some freshmen without majors] is consumer-based, where we recruit about 20 percent of students from regular admissions without a specific major and let them pick what they want to study in their second year.

What is your biggest plan?

It is shifting the focus of university management from department and graduate school-based management to an education and research-based one. The thing that contributes to humanity and creates the reputation of universities is, in the end, research. Fostering a key research group and creating a way to vitalize cooperation in research is the ace up our sleeve. We have started to create a main research center, foster erudite scholars in our faculty, vitalize research between disciplines and cooperate with industries.

Are there any inductive methods of research being carried out?

Let me give you an example of the campus town project [we are carrying out]. It is a 10 billion won [$8.3 million] project supported by the Seoul Metropolitan Government that intends to research finding jobs for the youth, improving safety conditions around university campuses and vitalizing the local commercial area. Instead of trying to fit the community within a small university, the project spreads the influence of universities to bigger communities. The project is called the gown and town project, combining the university’s gowns and the towns in the area.

University 4.0 seems to be a peculiar concept.

Most of the talents that universities foster are absorbed into economic sectors, which makes it important [for us] to move forward from [focusing on universities] and instead solve economic problems. The unemployment problem for people with doctoral degrees also needs to be seen in a societal and economical perspective. There are limitations to universities [absorbing those problems as their own]. Singapore’s educational vision is a good example.

Singapore successfully improved the competitiveness of its universities in the mid-1990s and changed its economy to a knowledge-based one. It advocated an intelligent island and carried out a “10-10” strategy that attracts 10 international companies and 10 prestigious universities [within the country]. [Singapore’s motto was], “Thinking schools, Learning nation” in 1997, “Teach less, Learn more” in 2005 and “Skills Future” in 2016. The most important thing is seeing education as a second economy. The Ministry of Education; Ministry of Trade, Industry and Energy; Ministry of Finance and Economy; and Ministry of Employment and Labor support [this idea]. It is a good example of where the economy and universities have to work hand in hand in order to succeed.

What kinds of global projects has CAU participated in?

I went to the Fermi National Accelerator Laboratory (FNAL) in the United States and signed an agreement [promising CAU’s contribution to an international science research held in the laboratory] on Sept. 20, 2018. FNAL conducts research on particle physics and accelerators. There are around 1,750 scientists and engineers from around the world who work there, and the lab cooperates with over 50 countries. In the international science research lead by the U.S. Department of Energy, 1,100 people from 32 countries participate. It is a project to reveal the mystery of neutrinos, one of the fundamental building blocks of the universe. Since we can participate in this project, isn’t that truly [a sign CAU is working on a] global scale?