U-18 team sorry for unsportsmanlike behavior

U-18 team sorry for unsportsmanlike behavior

Korea’s U-18 national football team is being criticized for its unsportsmanlike behavior. 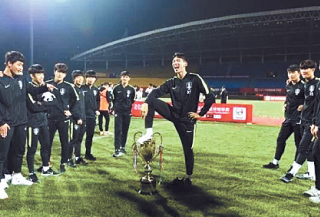 A Korean U-18 team player poses with his foot on the Panda Cup in a widely criticized celebration. The team was forced to apologize for unsportsmanlike behavior. [SCREEN CAPTURE]

While the team celebrated, one player posed with his foot on top of the trophy. The photo went viral and the team was heavily criticized for their behavior, especially as the showboating was interpreted as mocking the Chinese football team, who finished last after losing all three matches.

When the picture was released, the organizing committee of the Panda Cup, which was held in China, and the Chengdu Football Association officially complained and requested an apology. Due to this, shortly after the squad’s celebration, early on Thursday morning, the U-18 players and the coaching staff made a public apology.

“First of all, we apologize for the situation,” said a member of the team’s coaching staff. “One of our players made a huge mistake and we’re really sorry for the mistake again. We humbly apologize to all of [the] fans and players, all of [the] people in China. We hope to keep good relationships with [the] CFA and KFA.”

Prior to Korea’s match against China, Korea defeated Thailand 2-1 in the opening match and had a big 4-0 win against New Zealand.

The Panda Cup is an annual event now in its sixth year. This year marks the first time that Korea has been invited to play and, therefore, also the first time Korea has won. Whether Korea will be invited back for the next tournament is not yet clear.

The incident also comes as a disappointment to Korean fans who pride themselves on the good reputation of Korean athletes, led by Tottenham Hotspur’s Son Heung-min. In addition to his footballing skills, Son has become well known both at home and overseas for his good manners and sportsmanship both on and off the field. Son makes it into the headlines around the world for his good spirits and friendly demeanor as much as for his ability on the pitch.

The Korean U-18 national team returned to Korea this morning.