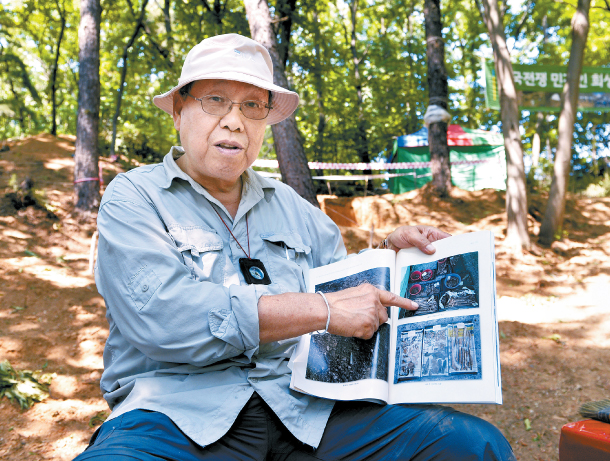 Park Sun-joo, an honorary professor at Chungbuk National University, leads an excavation that is searching for the remains of civilians who died during the 1950-53 Korean War on a hill in Asan, South Chungcheong. [KIM SUNG-TAE]

Park Sun-joo, an honorary professor at Chungbuk National University, has excavated the remains of around 5,000 people over 20 years.

When the JoongAng Sunday met with Park, 71, he was excavating a site with volunteers at a hill beside a national highway in Asan, South Chungcheong. He has been leading a joint investigation group that has been excavating the remains of civilians killed during the 1950-53 Korean War since 2014.

“According to family members of the victims and residents, the area was used to execute civilians who were accused of being collaborators of the North Korean Army for 20 days,” said Park. “I estimate that there were up to 150 civilians [executed] in the area alone.”

On that day, the volunteers were unable to find a single bone. This is because the area has been altered over the last 70 years. After the war, the hill was used for training reserve forces until the mid-1970s. It was then sold to ethnic Chinese and used as a burial site. These graves were moved to another location.

Q. What is the history behind the area where you are currently excavating?

A. After the Korean War began and the front line went as far as the Nakdong River, the North Korean Army retreated around the period when the South Korean Army recaptured Seoul on Sept. 28. Then, a temporary police organization, a paramilitary force, was created and civilians who were suspected of committing treason were [executed]. We suspect that around 700 to 800 people fell victim [to the killings].

I heard that there were a lot of excavations carried out at Mount Seolhwa in Asan.

In the period between February and April last year, 3,200 bone fragments were uncovered in the excavation. After the identification process, these results told us that around 208 civilians were killed here. Most of them were executed in front of an abandoned gold mine in front of Mount Seolhwa. Of the victims, 58 of them were [the bones of] children under 12 years old. We also excavated a lot of remains of women who died in their late teens through their late 20s. We found 70 Korean traditional ornamental hairpins that they had [when they died].

Were your intentions ever misunderstood when you excavated the remains of soldiers and also the remains of civilians who were executed for supporting the North?

On one side, there are people asking me why I am excavating the remains of commies whose left-wing activities killed them. However, this is not a problem to be seen in terms of left-right or liberal-conservative. These people were killed during a confusing era of war, when the [whole] country committed violence without any proper investigation or procedure. I want to find their remains to at least allow their souls to find peace.

You went to the United States to study anthropology. Has it helped you on your quest to identify the remains of people in your excavation?

Yes it did. Yet it is not enough, as the Korean War was a fight between people of the same race, and the front line was unclear. If there are no identification tags [dog tags] or relics [found next to the remains], it is difficult to identify whether the remains belong to friend or foe.

It has been over 20 years since you started excavating the remains of people.

I promised my family that I would do this until I am 64 years old. However, as there was a small amount of people in Korea who professionally studied skeletology, I couldn’t just quit. I promised myself to work five more years until I turn 69, but two more years have passed [since I turned 69]. I think I might work until 74, but I don’t know what will happen.

You are now over 70 years old.

I used a pickaxe myself just two or three years ago, but now it’s too much work for me. I can keep going on thanks to volunteers who come to the [excavation] site without [expecting] any reward.

Since the excavation project is operated privately, there must be a lot of problems, such as costs.

The country should take responsibility for the project. The project depends on fundraising and volunteers, and recently, local governments like the one in Asan have supported our budget, but there are limitations to that. A law should be created as soon as possible so that the excavation of the remains of victims can be carried out on a nationwide scale.


Do you have anything that you want?

I wish there was a center for excavating remains under the president’s care. We need a comprehensive organization that oversees excavation [projects] on finding and identifying the remains of fallen soldiers, civilian victims [during the war] and victims of the 1910-45 Japanese colonial era. Personally, I wait for the day when we find the remains of Korean independence fighter Ahn Jung-geun, which is my [lifelong goal].