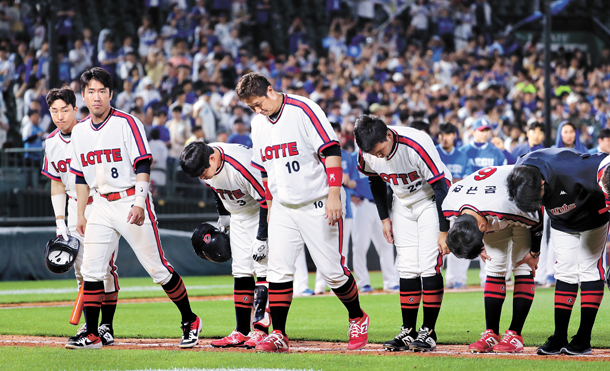 The Lotte Giants walk off the field following their loss to the Samsung Lions at Sajik Baseball Stadium in Busan on June 2. [YONHAP]

After losing five games in a row, the Lotte Giants desperately need to try something new.

Before the Giants started their weekend series against the KT Wiz, they were in desperate need of getting back on pace with wins as they were already in a two-game losing streak against the Hanwha Eagles. Yet things didn’t turn out the way the Giants wanted.

Instead of picking up a win, the Giants ended up losing all three games to the Wiz and dropping further behind in the pennant race. They are now 2.5 games behind the ninth ranked Kia Tigers and 12 games behind the Kiwoom Heroes, who currently hold the last postseason spot.

With things going so badly, the Giants have decided to make some radical changes. On Monday, the Busan team released foreign pitcher Jake Thompson and replaced him with Brock Dykxhoorn.

Thompson hasn’t made an appearance since a game against the LG Twins on May 25 because of an arm injury. As the Giants can’t afford to lose a pitcher in the starting rotation, they’ve decided to bring in Dykxhoorn, who was released by the Wyverns last week.

Thompson concluded his short career with the Giants by picking up two wins and three losses with a 4.74 ERA in 11 games. Of Thompson’s two wins, one was a shutout win.

The addition of Dykxhoorn is expected to strengthen the Giants’ pitching as he showed consistency on the mound, picking up three wins and two losses with a 3.56 ERA in 12 games with the Wyverns this season. Yet his weakness was the number of innings he pitched each game - in six of the 12 games he started in for the Wyverns, Dykxhoorn pitched in less than six innings.

But in terms of wild pitches, Dykxhoorn should have an immediate impact on the Giants. This season, the Giants’ pitchers have had the most wild pitches, at 60 as of Monday, while Dykxhoorn has had the least in the KBO, just one.

In addition to Thompson, the Giants are also parting with their foreign infielder, Carlos Asuaje. Playing his first season with the Giants, Asuaje had a .252 batting average with two home runs and 21 RBIs in 49 games as on Monday. Of the foreign fielders in the league, Asuaje has the lowest batting average.

Along with the Wiz, the NC Dinos also swept their weekend series against the Tigers in Changwon, South Gyeongsang. With a weekend sweep, the Dinos are ranked fourth with 35 wins and 29 losses, only two games behind the third-ranked LG Twins.

By taking another series 2-1 against the Eagles over the weekend, the Twins are now ranked third with 37 wins and 27 losses. They’ve also managed to get closer to the second-ranked team, only three games behind the Doosan Bears.

During Sunday’s game, the Wyverns’ new foreign pitcher, Henry Sosa, made his return to the KBO as he started against the Samsung Lions. Despite expectations, Sosa’s return was a disappointment as he gave up eight runs in four innings to restart his KBO career with a loss and an 18.00 ERA. Yet the Wyverns still took the series as they won the first two games over the weekend and extended their lead by two games at 42 wins and 22 losses.

The Lions are now ranked sixth with 29 wins and 35 losses, but they still have a long way to go until they have a real shot at catching up to the Heroes, as they are 5.5 games behind the last postseason spot.

Over the weekend, the KBO saw another complete game.

The Heroes’ Eric Jokisch tossed a complete game against the Bears on Sunday to lead the Heroes to a 4-0 win. Throughout Jokisch’s nine scoreless innings, he only gave up three hits while striking out six. With a win, the Heroes took the series and are now ranked fifth at 36 wins and 31 losses, while the Bears retained their spot in second with 41 wins and 25 losses.

Although the Bears are still in second, they are now two games behind the Wyverns.

With a new baseball this season, the KBO is seeing a larger number of complete games compared to previous seasons. Thirteen pitchers have already tossed complete games this season and of the 13, six tossed nine shutout innings.

This is a significant improvement as only 12 pitchers tossed complete games and only four shutouts throughout the entire 2018 season.

Starting today, the Twins will play a three-game series against the Giants at Jamsil Baseball Stadium in southern Seoul, while the Heroes head to Changwon to face the Dinos. In Suwon, the Wiz will host the Wyverns and the Tigers will play against the Lions in Gwangju. Over in Daejeon, the Eagles will take on the Bears. All games will start at 6:30 p.m.